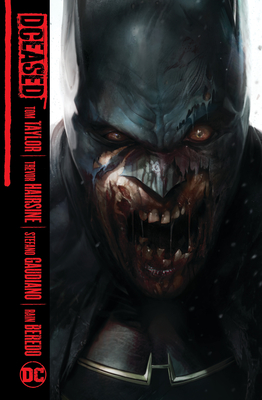 By Tom Taylor, Trevor Hairsine (Illustrator)
$29.99
Alas, not available through us.

What happens to the World's Greates Heroes if the world ends?

THE END IS HERE!

Cities. Nations. Undersea kingdoms and paradise islands. One by one, they fall to the monstrous hordes. Now only Superman, Batman, Wonder Woman, and the rest of the Justice League stand between Earth and utter annihilation...

But for how long?

Nothing they're ever faced has prepared them for an onslaught of this magnitude. Nothing they've ever seen can match the scale of the tragedy and terror that have been unleased. As heroes and villains, gods and monsters are wiped out, only one question remains:

What happens to the World's Greatest Heroes if the world ends?

New York Times bestselling writer Tom Taylor (Injustice) joins artists Trevor Hairsine (Red Hood and the Outlaws) and Stefano Gaudinao (The Walking Dead) to unleash an all-new vision of the DC Universe's darkest hour in DCeased. But be warned: the horror is contagious...

Tom Taylor is the creator of the Aurealis Award-winning graphic novel series The Deep (which tells the adventures of a multiethnic family of underwater explorers who live on a submarine). The Deep has been optioned by Technicolor to be turned into a 26-episode CG animated series. He is perhaps best known for the best-selling DC Comics series Injustice: Gods Among Us, Earth 2, Batman/Superman and his many Star Wars series. Taylor has written for DC Comics, Dark Horse Comics, IDW Publishing, WildStorm, 2000 AD and Gestalt Comics.

Trevor Hairsine is a British artist who got his start working for the Judge Dredd Megazine before continuing his career with Marvel Comics.