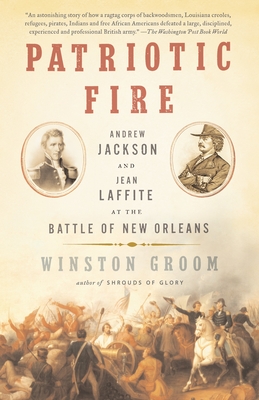 December 1814: its economy in tatters, its capital city of Washington, D.C., burnt to the ground, a young America was again at war with the militarily superior English crown. With an enormous enemy armada approaching New Orleans, two unlikely allies teamed up to repel the British in one of the greatest battles ever fought in North America.The defense of New Orleans fell to the backwoods general Andrew Jackson, who joined the raffish French pirate Jean Laffite to command a ramshackle army made of free blacks, Creole aristocrats, Choctaw Indians, gunboat sailors and militiamen. Together these leaders and their scruffy crew turned back a British force more than twice their number. Offering an enthralling narrative and outsized characters, Patriotic Fire is a vibrant recounting of the plots and strategies that made Jackson a national hero and gave the nascent republic a much-needed victory and surge of pride and patriotism.

Winston Groom is the author of twenty previous books, including Forrest Gump, Conversations with the Enemy (Pulitzer Prize finalist), Shiloh 1862, and The Generals. He served in Vietnam with the Fourth Infantry Division and lives in Point Clear, Alabama.

“An astonishing story of how a ragtag corps of backwoodsmen, Louisiana creoles, refugees, pirates, Indians and free African Americans defeated a large, disciplined, experienced and professional British army at the Battle of New Orleans.” —The Washington Post Book World

“Spectacular. . . .Groom’s finest book to date. . . . An eloquent and riveting account of the Battle of New Orleans.” —The Mobile Press-Register

“Gripping. . . . Groom is a first-rate storyteller who manages to breathe fresh life into an oft-told tale.” —The New Orleans Times-Picayune

“A riveting account of men at war during a crucial moment in the nation’s history. . . . Groom brings to vivid life the dynamic characters of Jackson and Laffite and the latter’s colorful band of brothers.” —Santa Fe New Mexican