Wild New World: The Epic Story of Animals and People in America (Hardcover) 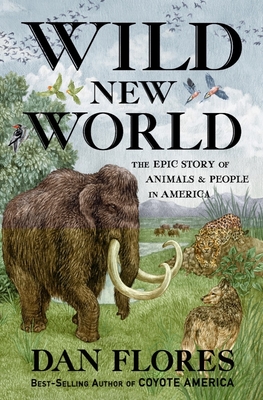 One of Kirkus Review's Best Nonfiction Books of 2022

A deep-time history of animals and humans in North America, by the best-selling and award-winning author of Coyote America.

In 1908, near Folsom, New Mexico, a cowboy discovered the remains of a herd of extinct giant bison. By examining flint points embedded in the bones, archeologists later determined that a band of humans had killed and butchered the animals 12,450 years ago. This discovery vastly expanded America’s known human history but also revealed the long-standing danger Homo sapiens presented to the continent’s evolutionary richness.

Distinguished author Dan Flores’s ambitious history chronicles the epoch in which humans and animals have coexisted in the “wild new world” of North America—a place shaped both by its own grand evolutionary forces and by momentous arrivals from Asia, Africa, and Europe. With portraits of iconic creatures such as mammoths, horses, wolves, and bison, Flores describes the evolution and historical ecology of North America like never before.

The arrival of humans precipitated an extraordinary disruption of this teeming environment. Flores treats humans not as a species apart but as a new animal entering two continents that had never seen our likes before. He shows how our long past as carnivorous hunters helped us settle America, initially establishing a coast-to-coast culture that lasted longer than the present United States. But humanity’s success had devastating consequences for other creatures. In telling this epic story, Flores traces the origins of today’s “Sixth Extinction” to the spread of humans around the world; tracks the story of a hundred centuries of Native America; explains how Old World ideologies precipitated 400 years of market-driven slaughter that devastated so many ancient American species; and explores the decline and miraculous recovery of species in recent decades.

In thrilling narrative style, informed by genomic science, evolutionary biology, and environmental history, Flores celebrates the astonishing bestiary that arose on our continent and introduces the complex human cultures and individuals who hastened its eradication, studied America’s animals, and moved heaven and earth to rescue them. Eons in scope and continental in scale, Wild New World is a sweeping yet intimate Big History of the animal-human story in America.

Dan Flores is A. B. Hammond Professor Emeritus of Western History at the University of Montana. A distinguished historian of the American West, he is the author of the best-selling books Coyote America and American Serengeti. He lives in Santa Fe, New Mexico.

Flores is a judicious and even-handed writer, and Wild New World provides readers with a sweeping and nuanced look from . . . a wise writer, disarmingly keen-eyed. Wild New World is full of wonders. . . . Flores does a consistently marvelous job.

To see this book nominated for the National Book Award or nominated for a Pulitzer would not surprise me. I don’t know how you’re going to top it.
— Steve Rinella - The MeatEater Podcast

Dan Flores has given us a searing and devastating accounting of what has been lost since humans first set foot in North America. This is environmental history at its best: gracefully written, filled with marvelous new details, and infused with a quiet fury that comes across as well-earned and long overdue. It belongs on the same shelf as Barry Lopez’s Of Wolves and Men.

This is a magnificent achievement—a sweeping saga, spanning a continent and stretching across thousands of years, about the human relationship with the wild animals of North America. With his sharp eye for the telling detail and compelling anecdote, Dan Flores takes a deep dive into both history and science and weaves it all into an unfolding story that keeps you turning the pages. Analytical, yet brimming with passion, Wild New World chronicles the profound tragedy of what one species—ours—did to all the other species we encountered and delivers a message as urgent as it is ancient.

This is the best book I have read on Americans and the amazing wildlife of this amazing continent. Dan Flores is sweeping, bold, and eloquent, weaving together modern genetic science and traditional literature, people and nature, the history of biology and of laws and politics. He informs us about the world that was, the world we have destroyed, while immersing us in his own personal search for the world that is. An inspiring work
— Donald Worster, author of A Passion for Nature: The Life of John Muir

Wild New World surveys America’s bestiary, teeming and rambunctious. Roaming its pages is like having an all-access pass to the backstory of a continent. Dan Flores is an erudite and indefatigable guide on this multidimensional journey through space, time, natural and human history, overflowing with arcane knowledge and surprising insight that is bolstered by the latest science, and, above all, an abiding love for this land and its creatures, past and present.

— John Vaillant, author of The Jaguar’s Children and The Tiger

An amazing history… Flores at his best.
— Birdfreak

[Wild New World is] a tale of wonder at what was and the pathos of extinction, both ancient and current. Flores writes beautifully of how geography shaped the landscape, of the impact of the spread of humans across the land during the Ice Age…. This is an outstanding and invaluable work of popular science.