In Harm's Way: The Sinking of the USS Indianapolis and the Extraordinary Story of Its Survivors (Revised and Updated) (Paperback) 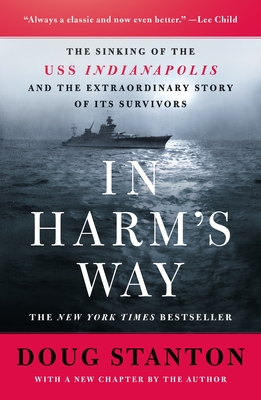 “Always a classic and now even better—a masterful account of one of history's most poignant and tragic secrets.”—Lee Child

Now available in an updated trade paperback edition, In Harm's Way is the bestselling adrenaline-charged account of America's worst naval disaster during World War II—and of the heroism of the men who, against all odds, survived.

On July 30, 1945, the USS Indianapolis was torpedoed in the South Pacific by a Japanese submarine. An estimated 300 men were killed upon impact; close to 900 sailors were cast into the Pacific Ocean, where they remained undetected by the navy for nearly four days and nights. Battered by a savage sea, they struggled to stay alive, fighting off sharks, hypothermia, and dementia. By the time rescue arrived, all but 316 men had died. The captain's subsequent court-martial left many questions unanswered: How did the navy fail to realize the Indianapolis was missing? Why was the cruiser traveling unescorted in enemy waters? And perhaps most amazing of all, how did these 316 men manage to survive?

Interweaving the stories of three survivors—the captain, the ship's doctor, and a young marine—journalist Doug Stanton has brought this astonishing human drama to life in a narrative that is at once immediate and timeless. The definitive account of a little-known chapter in World War II history, In Harm's Way is a classic tale of war, survival, and extraordinary courage.

Doug Stanton is a #1 New York Times bestselling author whose writing has appeared in Esquire, The New York Times, TIME, The Washington Post, and other national publications. The bestselling In Harm’s Way was included in the US Navy’s required reading list for naval officers. His book Horse Soldiers is the basis for the movie 12 Strong, starring Chris Hemsworth. Stanton lectures nationally and has appeared on national TV and radio. He and Anne Stanton provided an initial donation for the publication of Only 316 Survived, and founded a scholarship program benefiting grandchildren of the USS Indianapolis crew.

“Always a classic and now even better—a masterful account of one of history's most poignant and tragic secrets.”
—Lee Child

“Infuriating, mesmerizing, and heartbreaking . . . Impossible to put down.”
—Rick Atkinson

“Powerful . . . One of the most poignant tragedies and injustices of World War II.”
—Mark Bowden

“Do yourself a favor. Read In Harm's Way.”
—James Bradley