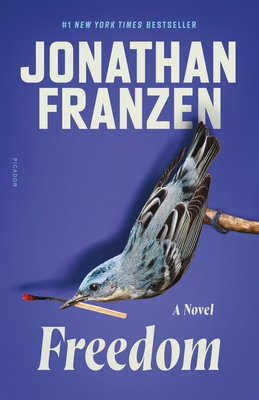 Freedom, by New York Times-bestselling author Jonathan Franzen, the author of Crossroads, is a masterly novel of contemporary love and marriage, a brilliant charting of the temptations and burdens of liberty: the thrills of teenage lust, the shaken compromises of middle age, the wages of suburban sprawl, and the heavy weight of empire.

Patty and Walter Berglund were the pioneers of old St. Paul—the gentrifiers, the hands-on parents, the avant garde of the Whole Foods generation. But now, in the new millennium, they have become a mystery. Why has their teenage son moved in with the aggressively Republican family next door? Why has Walter, once an environmental lawyer, taken a job working with Big Coal? Most startling of all, why has Patty, the perfect neighbor, turned into the local Fury?

Patty and Walter Berglund are indelible characters, and their mistakes and joys, as they struggle to learn how to live in an ever more confusing world, have become touchstones of contemporary American reality.

Jonathan Franzen is the author of five novels, including The Corrections, Freedom, and Crossroads, and five works of nonfiction, most recently Farther Away and The End of the End of the Earth, all published by Farrar, Straus and Giroux. He lives in Santa Cruz, California.

“Mr. Franzen has written his most deeply felt novel yet--a novel that turns out to be both a compelling biography of a dysfunctional family and an indelible portrait of our times.” —The New York Times

“One of the best living American novelists.” —Time

“A surprisingly moving and even hopeful epic.” —NPR

“A page turner that engages the mind.” —Newsday

“It's refreshing to see a novelist who wants to engage the questions of our time in the tradition of 20th-century greats like John Steinbeck and Sinclair Lewis . . . [This] is a book you'll still be thinking about long after you've finished reading it.” —Associated Press

“Deeply moving and superbly crafted . . . It's such a full novel, rich in description, broad in its reach and full of wry observations.” —Pittsburg Post-Gazette

“His writing is so gorgeous . . . Franzen is one of those exceptional writers whose works define an era and a generation, and his books demand to be read.” —St. Louis Post-Dispatch

“A tour de force . . . one of the finest novelists of his generation.” —The Philadelphia Inquirer

“A highly readable triumph of conventional realism . . . Addictive.” —The National

“A literary genius . . . This is simply on a different plane from other contemporary fiction . . . Freedom is the novel of the year, and the century.” —The Guardian (UK)