Accidental Czar: The Life and Lies of Vladimir Putin (Hardcover) 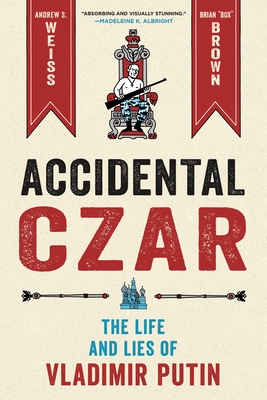 This riveting graphic novel biography chronicles Vladimir Putin's rise from a mid-level KGB officer to the autocratic leader of Russia and reveals the truth behind the strongman persona he has spent his career cultivating.

In the West’s collective imagination, Vladimir Putin is a devious cartoon villain, constantly plotting and scheming to destroy his enemies around the globe and in Ukraine. But how did an undistinguished mid-level KGB officer become one of the most powerful leaders in Russian history? And how much of Putin’s tough-guy persona is a calculated performance?

In Accidental Czar, Andrew S. Weiss, a former White House Russia expert, and Brian “Box” Brown show how Putin has successfully cast himself as a cunning, larger-than-life political mastermind—and how the rest of the world has played into the Kremlin’s hands by treating him as one. They shatter all of these myths and expose the man behind the façade.

Andrew S. Weiss is the James Family Chair and Vice President for Studies at the Carnegie Endowment for International Peace where he oversees research on Russia and Eurasia. He served in various policy roles at the National Security Council, the State Department and Pentagon during both Democratic and Republican administrations.

Brian “Box” Brown is an Eisner Award–winning author whose comics have appeared in the New York Times, Playboy, and New York magazine. His books include the New York Times–bestselling Andre the Giant: Life and Legend, Tetris: The Games People Play, Is This Guy for Real?: The Unbelievable Andy Kaufman, Cannabis: The Illegalization of Weed in America, Child Star, and Accidental Czar (with writer Andrew S. Weiss). boxbrown.com

Featured on NPR's All Things Considered
Featured as NPR's Book of the Day, November 18th, 2022
Featured on PBS News Hour

“Accidental Czar is an absorbing and visually stunning account of Vladimir Putin’s rise and take-no-prisoners approach to wielding power on the world stage. Andrew S. Weiss and Brian Brown have made one of the most consequential stories of our time more accessible and engaging for readers of all backgrounds. I would urge anyone who wants to better understand the forces shaping modern Russia, and disrupting our world, to open up this extraordinary book.” —Former Secretary of State Madeleine K. Albright

“A witty and comprehensive takedown of the annoying Putin-is-a-genius myth, told by a writer who somehow found himself in the middle of the polyniy pizdets (translation: “complete clusterf*$k”) that is contemporary Russia.” —Gary Shteyngart, author of Our Country Friends, Super Sad True Love Story, Little Failure, and Absurdistan

“Accidental Czar brilliantly tells the story of Vladimir Putin’s trajectory from a “nobody” in the Soviet KGB to the most powerful man in Russia—and one of the most feared men in the entire world. Andrew S. Weiss and Brian Brown situate Putin’s methods and worldview in centuries of Russian history. It is disturbing, engrossing, and entertaining.” —Max Boot, historian, senior fellow at the Council on Foreign Relations, and columnist at Washington Post

“Accidental Czar is a compelling account of Putin’s story, written by one of Washington’s most astute analysts of Russian politics. It will do more to educate the English-speaking world about Putin than dozens of previously published biographies combined!” —Michael McFaul, former United States ambassador to Russia and professor of political science, Stanford University

“Vladimir Putin has often presented himself as a cartoonish image of a strongman, so it is brilliantly fitting that Accidental Czar uses the graphic form to tell the true story behind the caricature Putin has spent the last two decades cultivating. Bravo!” —Susan B. Glasser, staff writer at the New Yorker, former Washington Post bureau chief in Moscow, and co-author of Kremlin Rising: Vladimir Putin’s Russia and the End of Revolution

“This biography of Vladimir Putin deftly combines entertainment and serious analysis. Renowned Russia scholar Andrew S. Weiss and artist Brian Brown have found the perfect means to introduce the complexities of Russian politics and Putin’s peculiarities to a new set of audiences. Everyone should have a copy of Accidental Czar on their bookshelf.” —Fiona Hill, senior fellow at the Brookings Institution and co-author of Mr. Putin: Operative in the Kremlin

“Engagingly presented and sophisticated in analysis, this handsome graphic novel offers a shrewd understanding of Vladimir Putin’s power and the challenge it presents to the democracies of the West.” —David Frum, staff writer at The Atlantic, author of Trumpocracy: The Corruption of the American Republic, and former speechwriter for President George W. Bush

"The war in Ukraine has clearly demonstrated that Vladimir Putin is no strategic genius. Accidental Czar paints a fascinating portrait of a leader who still single-handedly managed to shape the course of history over the past two decades. This unique graphic novel is essential reading for anyone who wants to understand how such an ordinary man managed to reach the apex of Russian politics and become one of the most powerful men in the world." —Ian Bremmer, President of Eurasia Group

"I'm obsessed with Andrew Weiss's Accidental Czar: The Life and Lies of Vladimir Putin, which is a graphic novel about Putin's rise to power. It's illustrated by the well-known Brian "Box" Brown and it's so, so great. I've already gotten it for a bibliophilic couple of nephews, though it's great for adults, too." —Julia Ioffe, Founding Partner and Washington Correspondent, Puck News

"With a deceptively simple design and a color palette that mirrors cold war artwork and propaganda posters, Brown’s artwork adds significantly to the text, providing nearly every sentence with some sort of illustration and subsequently breaking up the complicated political science and history surrounding the subject."—Booklist

"This is a very important book[...]Get it, read it, pass it on."—Sequential Tart