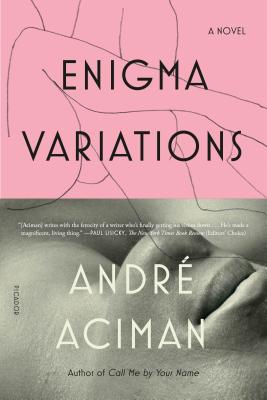 From André Aciman, the author of Call Me by Your Name (now a major motion picture and the winner of the Oscar™ for Best Adapted Screenplay) comes “a sensory masterclass, absorbing, intelligent, unforgettable” (Times Literary Supplement).

Enigma Variations charts the life of a man named Paul, whose loves remain as consuming and as covetous throughout his adulthood as they were in his adolescence. Whether the setting is southern Italy, where as a boy he has a crush on his parents’ cabinetmaker, or a snowbound campus in New England, where his enduring passion for a girl he’ll meet again and again over the years is punctuated by anonymous encounters with men—whether he’s on a tennis court in Central Park or on a New York sidewalk in early spring. Paul’s attachments are ungraspable, transient, and forever underwritten by raw desire.

Ahead of every step Paul takes, his hopes, denials, fears, and regrets are always ready to lay their traps. Yet the dream of love lingers. We may not always know what we want. We may remain enigmas to ourselves and to others. But sooner or later, we discover who we’ve always known we were.

André Aciman is the New York Times bestselling author of Call Me By Your Name, Out of Egypt, Eight White Nights, False Papers, Alibis, Harvard Square, Enigma Variations, and Find Me. He's the editor of The Proust Project and teaches comparative literature at the Graduate Center of the City University of New York. He lives with his wife in Manhattan.

"Aciman writes arousal so beautifully you miss it when it's gone . . . [Aciman is] up to something bolder this time . . . Aciman is all the way himself here. He writes with the ferocity of a writer who's finally getting his vision down, and he has to say it, has to get it out. He's made a magnificent, living thing." —Paul Lisicky, New York Times Book Review

"One of the great novels of this century so far."—Michael Silverblatt, host of "Bookworm" on KCRW

"Is there any writer out there who can conjure the seismic swings and loop-the-loop giddiness of sexual infatuation the way that André Aciman can? He first revealed this talent in his debut novel, Call Me By Your Name, the book that sealed his reputation along with his sublime memoir, Out of Egypt . . . The allure of Enigma Variations rests in its agile sense of the heart’s paradoxes and might-have-beens." —Michael Upchurch, Boston Globe

"A breathless, sketched rendering of one man’s life in love, Aciman’s novel speaks earnestly not only of longing and lust, but also of more complicated emotions . . . [Aciman] portrays Paul convincingly as a sensuous and self-aware figure, forever treading the border between melodrama and tragedy." —Publishers Weekly