Death in the Baltic: The World War II Sinking of the Wilhelm Gustloff (Paperback) 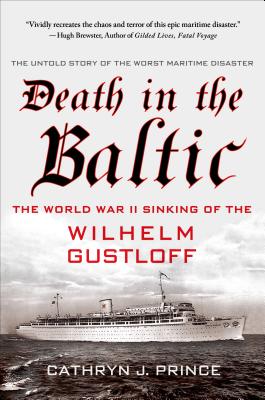 The worst maritime disaster ever occurred during World War II, when more than 9,000 German civilians drowned. It went unreported.

January 1945: The outcome of World War II has been determined. The Third Reich is in free fall as the Russians close in from the east. Berlin plans an eleventh-hour exodus for the German civilians trapped in the Red Army's way. More than 10,000 women, children, sick, and elderly pack aboard the Wilhelm Gustloff, a former cruise ship. Soon after the ship leaves port and the passengers sigh in relief, three Soviet torpedoes strike it, inflicting catastrophic damage and throwing passengers into the frozen waters of the Baltic.

More than 9,400 perished in the night—six times the number lost on the Titanic. Yet as the Cold War started no one wanted to acknowledge the sinking. Drawing on interviews with survivors, as well as the letters and diaries of those who perished, award-wining author Cathryn J. Prince reconstructs this forgotten moment in history with Death in the Baltic. She weaves these personal narratives into a broader story, finally giving this WWII tragedy its rightful remembrance.

Cathryn J. Prince is the author of A Professor, a President, and a Meteor: The Birth of American Science, for which she won the Connecticut Press Club's 2011 Book Award for non-fiction. She is also the author of Burn the Town and Sack the Banks: Confederates Attack Vermont! and Shot from the Sky: American POWs in Switzerland. She worked as a correspondent for The Christian Science Monitor in Switzerland and in New York, where she covered the United Nations. Prince covers the Connecticut State House for Patch.com.

“Based on German and Russian records, as well as material gained from interviews with survivors, author Prince has written a gripping account of one of the least-known human disasters of World War II.” —Military History Magazine

“In describing the experiences of survivors, whom she has been adept in tracing, the journalist Cathryn Prince gives voices to ‘ordinary people who suffered during extraordinary times' -- and does so with scrupulous empathy.” —The Spectator

“A must-read for anyone wanting to examine the effects of the War on both sides.” —Warfare magazine

“The story of the worst maritime disaster in history…Prince has scoured the planet for survivors, treating their harrowing stories with gentle empathy, from the first sickening bolts of the torpedoes to the chaos and terror of the ship's swift sinking as passengers fell into the freezing water, clambered for lifeboats and watched loved ones disappear in the tumult… An engaging study of a shocking tragedy.” —Kirkus Reviews

“If you think that the sinking of the Titanic was the worst maritime disaster ever, then you're wrong….Amazing and harrowing story, well written and documented.” —Jean-Paul Adriaansen, Water Street Bookstore

“The sinking of the cruise liner that was once the pride of Hitler's Strength Through Joy program has long been overlooked by maritime historians. Yet when the Wilhelm Gustloff disappeared beneath the freezing waters of the Baltic in January of 1945, she took with her more than six times the number of people lost on the Titanic. Through careful research and interviews with the few remaining survivors. Cathryn J. Prince vividly recreates the chaos and terror of this epic maritime disaster.” —Hugh Brewster, author of Gilded Lives, Fatal Voyage: The Titanic's First-Class Passengers And Their World

“Death in the Baltic is the engrossing story of a tragedy that should never have been forgotten. With the grace of a writer who truly feels the loss of thousands in the cold waters of the Baltic Sea, Cathryn J. Prince has preserved their memory and improved our sense of history.” —Gregory A. Freeman, author of The Forgotten 500

“Cathryn Prince reaches into the dark corners of history, and draws attention to this unreported tragedy through the experiences of the people who lived it.” —Stacy Perman, author of A Grand Complication

“With Death in the Baltic author Cathryn J. Prince recounts an important but little known aspect of World War II. Rich in detail, drama, and tragedy, Prince's gripping narrative skillfully interweaves the traumatic events of the final weeks of the war with moving stories of survivors of a maritime disaster which claimed more lives than the sinking of the Titanic.” —Dwight Jon Zimmerman, award-winning author of Uncommon Valor

“Death in the Baltic tells a gripping, invaluable story. Out of a desire for vengeance and recognition, one Soviet submarine commander caused the deaths of thousands of refugees, deaths that the victors of World War II chose to ignore. Cathryn Prince breaks the silence around the devastation many German civilians suffered at the end of the war. Parting the curtain on the "collateral damage" the Allied Forces accepted as a necessary strategy for defeating Hitler, Death in the Baltic reveals that war's trauma spares no one.” —Leila Levinson, award-winning author of Gated Grief

“The story of the sinking of the Willhelm Gustloff is still unkown to a majority of non-Germans…It is certainly a grimly fascinating story, not least because of the wealth of human interest that it contains…Cathryn Prince tells the story of the Gustloff briskly and engagingly…making good use of the eyewitness accounts of the survivors.” —History Today