Madison in the Sixties (Paperback) 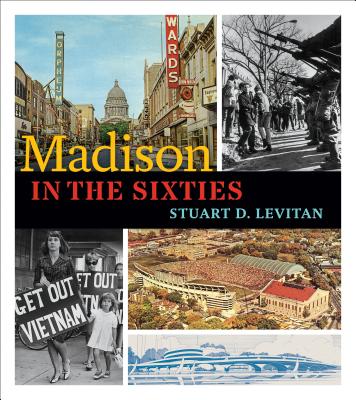 Madison made history in the sixties.

Landmark civil rights laws were passed. Pivotal campus protests were waged. A spring block party turned into a three-night riot. Factor in urban renewal troubles, a bitter battle over efforts to build Frank Lloyd Wright’s Monona Terrace, and the expanding influence of the University of Wisconsin, and the decade assumes legendary status.

In this first-ever comprehensive narrative of these issues—plus accounts of everything from politics to public schools, construction to crime, and more—Madison historian Stuart D. Levitan chronicles the birth of modern Madison with style and well-researched substance. This heavily illustrated book also features annotated photographs that document the dramatic changes occurring downtown, on campus, and to the Greenbush neighborhood throughout the decade. Madison in the Sixties is an absorbing account of ten years that changed the city forever.

Stuart D. Levitan is an award-winning print and broadcast journalist and long-time local official, has been a mainstay of Madison media and government since 1975. He is the author of Madison: The Illustrated Sesquicentennial History, Vol. 1, has written extensively for local and national newspapers and magazines, and produces the Madison in the Sixties podcast on WORT-FM. As a downtown Dane County Supervisor in the mid-1980's, he wrote the ordinances establishing the fair housing code, Sensitive Crimes Commission, and newspaper recycling program. Since 1989, he has chaired the Madison Community Development Authority Landmarks Committee, Plan Commission, and several other city and nonprofit boards. A graduate of the UW Law School, he spread labor peace and imposed industrial justice as a mediator-arbitrator for the Wisconsin Employment Relations Commission from 1987 to 2015.

"In Madison in the Sixties, Levitan has given us a book worthy of the decade it documents."-Bill Lueders, The Isthmus