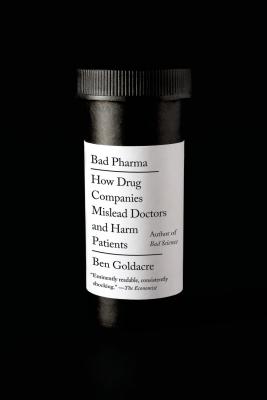 We like to imagine that medicine is based on evidence and the results of fair testing and clinical trials. In reality, those tests and trials are often profoundly flawed. We like to imagine that doctors who write prescriptions for everything from antidepressants to cancer drugs to heart medication are familiar with the research literature about these drugs, when in reality much of the research is hidden from them by drug companies. We like to imagine that doctors are impartially educated, when in reality much of their education is funded by the pharmaceutical industry. We like to imagine that regulators have some code of ethics and let only effective drugs onto the market, when in reality they approve useless drugs, with data on side effects casually withheld from doctors and patients.
All these problems have been shielded from public scrutiny because they are too complex to capture in a sound bite. Ben Goldacre shows that the true scale of this murderous disaster fully reveals itself only when the details are untangled. He believes we should all be able to understand precisely how data manipulation works and how research misconduct in the medical industry affects us on a global scale.
With Goldacre's characteristic flair and a forensic attention to detail, Bad Pharma reveals a shockingly broken system in need of regulation. This is the pharmaceutical industry as it has never been seen before.

Ben Goldacre is a doctor and writer. His first book Bad Science was an international bestseller, and has been translated into twenty-five languages. He lives in London.

“Slightly technical, eminently readable, consistently shocking, occasionally hectoring and unapologetically polemical . . . This is a book that deserves to be widely read, because anyone who does read it cannot help feeling both uncomfortable and angry.” —The Economist

“Ben Goldacre has done it again . . . This is a morbidly fascinating and dispiriting account, yet one which deserves (and needs) to be read and acted upon without delay.” —Dennis Rosen, Dennis Rosen, The Boston Globe

“A thorough piece of investigative medical journalism. What keeps you turning its pages is the accessibility of Goldacre's writing, . . . his genuine, indignant passion, his careful gathering of evidence and his use of stories, some of them personal, which bring the book to life.” —Luisa Dillner, The Guardian

“Goldacre's research is scrupulous, and lay readers may find themselves converted by his geeky ardor. ” —The New Yorker

“[A]n eye-opening glance into a world of experts who have failed us.” —The New York Times Book Review

“In this searing exposé of the pharmaceutical industry, physician and journalist Goldacre uncovers a cesspool of corrupt practices designed to sell useless or dangerous drugs to an unsuspecting public . . . Goldacre conveys complicated scientific, medical, and ethical issues in simple, clear, plainspoken language that pulls no punches. The result is a smart, infuriating diagnosis of the rotten heart of the medical-industrial complex.” —Publishers Weekly

“A useful guide for policymakers, doctors and the patients who need protection against deliberate disinformation.” —Kirkus Reviews

“Ben Goldacre is exasperated . . . He is irked, vexed, bugged, ticked off at sometimes inadvertent (because of stupidity) but more often deliberate deceptions perpetrated in the name of science . . . You'll get a good grounding in the importance of evidence-based medicine . . . ‘Studies show' is not good enough, he writes: ‘The plural of "anecdote" is not data.'” —Katherine Bouton, The New York Times, on Bad Science

“One of the best books I've ever read. It completely changed the way I saw the world. And I actually mean it. ” —Tim Harford, author of The Undercover Economist, on Bad Science

“Ben Goldacre lucidly, and irreverently, debunks a frightening amount of pseudoscience, from cosmetics to dietary supplements to alternative medicine. If you want to read one book to become a better-informed consumer and citizen, read Bad Science.” —Sandeep Jauhar, author of Intern, on Bad Science

“This is a much-needed book. Ben Goldacre shows us--with hysterical wit--how to separate the scam artists from real science. In a world of misinformation, this is a rare gem.” —Timothy Ferriss, author of The 4-Hour Workweek, on Bad Science

“Ben Goldacre uses a brilliant mix of science and wit to challenge and investigate alternative therapists and the big pharmaceutical corporations. Bad Science is an invaluable tool for anybody who wants to protect themselves from the snake-oil salesmen of the twenty-first century.” —Simon Singh, author of Big Bang and Fermat's Last Theorem, on Bad Science

“British physician and journalist Ben Goldacre takes aim at quack doctors, pharmaceutical companies and poorly designed studies in extraordinary fashion in Bad Science . . . Goldacre shines in a chapter about bad scientific studies by writing it from the perspective of a make-believe big pharma researcher who needs to bring a mediocre new drug to market. He explains exactly how to skew the data to show a positive result. 'I'm so good at this I scare myself,' he writes. 'Comes from reading too many rubbish trials.'” —Rachel Saslow, The Washington Post, on Bad Science

“Funny and biting . . . While it is a very entertaining book, it also provides important insight into the horrifying outcomes that can result when willful anti-intellectualism is allowed equal footing with scientific methodology.” —Dennis Rosen, The Boston Globe, on Bad Science

“I hereby make the heretical argument that it is time to stop cramming kids' heads with the Krebs cycle, Ohm's law, and the myriad other facts that constitute today's science curricula. Instead, what we need to teach is the ability to detect Bad Science--BS, if you will. The reason we do science in the first place is so that 'our own atomized experiences and prejudices' don't mislead us, as Ben Goldacre of the London School of Hygiene and Tropical Medicine puts it in his new book, Bad Science: Quacks, Hacks, and Big Pharma Flacks. Understanding what counts as evidence should therefore trump memorizing the structural formulas for alkanes.” —Sharon Begley, Newsweek.com, on Bad Science

“Dr. Ben Goldacre's UK bestseller Bad Science: Quacks, Hacks, and Big Pharma Flacks is finally in print in the USA, and Americans are lucky to have it. Goldacre writes a terrific Guardian column analyzing (and debunking) popular science reporting, and has been a star in the effort to set the record straight on woowoo 'nutritionists,' doctors who claim that AIDS can be cured with vitamns, and vaccination/autism scares. Bad Science is more than just a debunking expose (though it's that): it's a toolkit for critical thinking, a primer on statistics and valid study design, a guide to meta-analysis and other tools for uncovering and understanding truth . . . The book should be required reading for everyone who cares about health, science, and public policy.” —BoingBoing.net on Bad Science