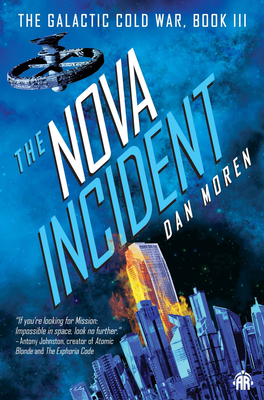 When a bomb explodes in the bustling Commonwealth capital city of Salaam, responsibility is quickly claimed by an extremist independence movement. But after a former comrade, an ex-spy with his own agenda, is implicated in the attack, Simon Kovalic and his team of covert operatives are tasked with untangling the threads of a dangerous plot that could have implications on a galactic scale. And the deeper Kovalic digs, the more he'll uncover a maze of secrets, lies, and deception that may force even the most seasoned spy to question his own loyalties.

DAN MOREN is a novelist, freelance writer, and prolific podcaster. A former senior editor at Macworld, his work has appeared in the Boston Globe, Macworld, Popular Science, Yahoo Tech, and many others. He co-hosts tech podcasts Clockwise and The Rebound, writes and hosts nerdy quiz show Inconceivable!, and appears on the award-winning The Incomparable. Dan lives with his wife in Somerville, Massachusetts, where he is never far from a set of polyhedral dice.

"A breathtakingly twisty story… Moren’s meaty storytelling capitalizes on Kovalic and his crew’s complex relationships and improvisational teamwork and buzzes with well-earned surprises. Moren proves there’s plenty more life in this series with an entry that satisfies in its own right and sets things up nicely for the next installment."
– Publishers Weekly

"As in his previous novels in the series, Moren spins an intricate spy story hinging on technology and character depth to draw the reader along. The Nova Incident will keep readers on edge as the team works through relatable trust and relationship issues."
– Booklist

“If you’re looking for Mission: Impossible in space, look no further.”
– Antony Johnston, creator of Atomic Blonde and The Coldest Winter

"The Nova Incident mingles thrilling political intrigue with spectacular sci-fi tech and twists you don't see coming. Kovalic and the crew come up with creative ways to get out of their life-threatening predicaments... and always with a clever quip along the way. Like Moren's other Galactic Cold War books, The Nova Incident is a one-sitting blast of story, which ends in a puff of smoke and the promise of more excitement to come!"
– T.J. Berry, author of Space Unicorn Blues

"This is another outstanding installment of The Galactic Cold War series. If you are like me and loved the first two, you'll love this one too."
–Michael Mammay, author of The Planetside series