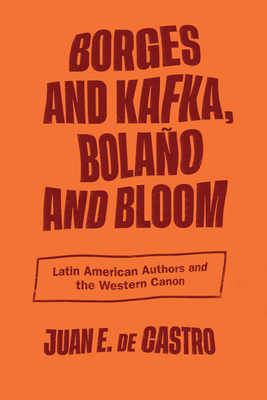 At a time in which many in the United States see Spanish America as a distinct and, for some, threatening culture clearly differentiated from that of Europe and the US, it may be of use to look at the works of some of the most representative and celebrated writers from the region to see how they imagined their relationship to Western culture and literature. In fact, while authors across stylistic and political divides--like Gabriela Mistral, Jorge Luis Borges, or Gabriel Garc a M rquez--see their work as being framed within the confines of a globalized Western literary tradition, their relationship, rather than epigonal, is often subversive. Borges and Kafka, Bola o and Bloom is a parsing not simply of these authors' reactions to a canon, but of the notion of canon writ large and the inequities and erasures therein. It concludes with a look at the testimonial and autobiographical writings of Rigoberta Mench and Lurgio Gavil n, who arguably represent the trajectory of Indigenous testimonial and autobiographical writing during the last forty years, noting how their texts represent alternative ways of relating to national and, on occasion, Western cultures. This study is a new attempt to map writers' diverse ways of thinking about locality and universality from within and without what is known as the canon.