A Place to Land: Martin Luther King Jr. and the Speech That Inspired a Nation (Paperback) 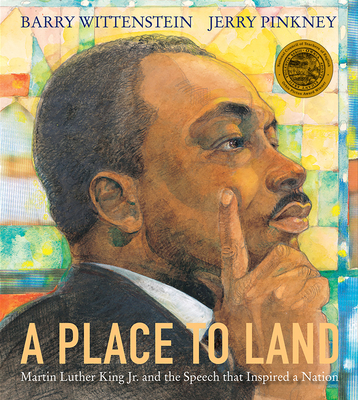 As a new generation of activists demands an end to racism, A Place to Land reflects on Martin Luther King, Jr.'s "I Have a Dream" speech and the movement that it galvanized. Now available in paperback.

Much has been written about Martin Luther King, Jr. and the 1963 March on Washington. But there's little on his legendary speech and how he came to write it.

Finding this place to land was what Martin Luther King, Jr. struggled with, alongside advisors and fellow speech writers, in the Willard Hotel the night before the March on Washington, where he gave his historic "I Have a Dream" speech. But those famous words were never intended to be heard on that day, not even written down for that day, not even once.

Barry Wittenstein teams up with legendary illustrator Jerry Pinkney to tell the story of how, against all odds, Martin found his place to land.

An ALA Notable Children's Book
A Capitol Choices Noteworthy Title
Nominated for an NAACP Image Award
A Bank Street Best Book of the Year
A Notable Social Studies Trade Book for Young People
A Booklist Editors' Choice
Named a Best Book of the Year by Publishers Weekly, Kirkus Reviews, and School Library Journal
Selected for the CBC Champions of Change Showcase

Barry Wittenstein is the author of several picture books, including Waiting for Pumpsie and The Boo-Boos That Changed the World: A True Story About an Accidental Invention (Really). He is pursuing a Masters in Childhood Education at Hunter College and lives in New York City.

Legendary author and illustrator Jerry Pinkney's many accolades include the Caldecott Medal, five Coretta Scott King Awards, five Coretta Scott King Honor Awards, four New York Times Best Illustrated Books, and four gold medals from the Society of Illustrators. He served on the National Council of the Arts, is a Trustee Emeritus of the Eric Carle Museum of Picture Book Art, and has taught at Pratt Institute, the University of Delaware, and the University of Buffalo. He lives in Westchester, New York.

★ "Wittenstein's free-verse narrative perfectly captures the tension leading up to the speech as each adviser urged his own ideas while remaining a supportive community. Pinkney's trademark illustrations dramatize this and the speech, adding power and further illuminating the sense of historical importance. Gives readers a fresh and thrilling sense of what it took to make history." —Kirkus Reviews, Starred Review

★ "The urgency of the text, underscored by boldface type marking the relentless passing of the hours, is complemented beautifully by Pinkney's more contemplative art. . . . This is essential American history, distilled into one of the most powerful picture books of the year." —The Horn Book, Starred Review

★ "Wittenstein's riveting story shows that historical moments—and movements—are not inevitable; they're shaped and changed by many hands and voices. In emphatic phrases and art alternatingly warm and tense, the creators' moving portrait of the civil rights leader in consultation with others is an invaluable addition to the shelf of King biographies." —Publishers Weekly, Starred Review

★ "an evocative study in King's speechwriting process. A work that takes a familiar topic and shapes it into a moving portrait of ­undeterred determination and conviction."—School Library Journal, Starred Review

"a vivid snapshot of a moment of creative, collaborative, persuasive energy that takes the topic far beyond 'didja know'-style trivia about a historic event and focuses on the subtle elements that can change a speech forever. Pinkney’s familiar watercolor portraiture takes on a new level here from the addition of graphite and colored-pencil textures and collage notes; captions to identify inspirations and attending luminaries float softly like benedictions, while sign lettering, both segregationist and protest, cuts sharply through cloudy backgrounds."—The Bulletin of the Center for Children's Books

"[The] book, illustrated with enormous heart and rich textures by Jerry Pinkney, presents Dr. King's inspiring words as part of an outsize pageant, featuring King, the crowds and others on the stage, including Mahalia Jackson, who urged King, 'Tell them about the dream!'"—The Washington Post