Child Survivors of the Holocaust: The Youngest Remnant and the American Experience (Paperback) 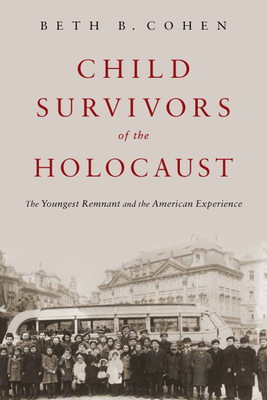 The majority of European Jewish children alive in 1939 were murdered during the Holocaust. Of 1.5 million children, only an estimated 150,000 survived. In the aftermath of the Shoah, efforts by American Jews brought several thousand of these child survivors to the United States. In Child Survivors of the Holocaust, historian Beth B. Cohen weaves together survivor testimonies and archival documents to bring their story to light. She reveals that even as child survivors were resettled and “saved,” they struggled to adapt to new lives as members of adoptive families, previously unknown American Jewish kin networks, or their own survivor relatives. Nonetheless, the youngsters moved ahead. As Cohen demonstrates, the experiences both during and after the war shadowed their lives and relationships through adulthood, yet an identity as “survivors” eluded them for decades. Now, as the last living link to the Holocaust, the voices of Child Survivors are finally being heard.

BETH B. COHEN is on the faculty at California State University, Northridge, and she is the author of Case Closed: Holocaust Survivors in Postwar America (Rutgers University Press in association with the United States Holocaust Memorial Museum).

"A little-known, sometimes disturbing, but fascinating history about children, families and the Holocaust."
— Diane L. Wolf

"Cohen's unique and original study is an important, empathetic story of child survivors, a group who profoundly influences the direction of Holocaust memory and education today."
— Avinoam Patt

“Extremely well written and thoughtful, dealing respectfully and empathetically with the important and often neglected issue of child survivors…Cohen enables a range of voices to be heard."
— Fraenkel Prize Committee

"The work deepen[s] existing survivor scholarship, will be useful for cross-national comparisons, and will add to Jewish history and American immigration history."
— Choice

"Cohen has made an important and original contribution to the historiography of children and war and Jewish children in the Holocaust and suggests a number of new areas that deserve further study."
— The American Historical Review