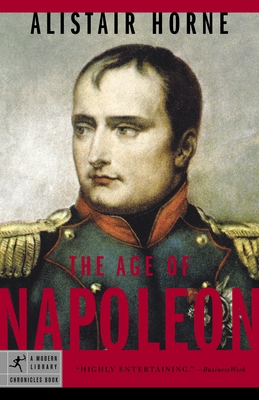 The age of Napoleon transformed Europe, laying the foundations for the modern world. Now Alistair Horne, one of the great chroniclers of French history gives us a fresh account of that remarkable time.

Born into poverty on the remote island of Corsica, he rose to prominence in the turbulent years following the French Revolution, when most of Europe was arrayed against France. Through a string of brilliant and improbable victories (gained as much through his remarkable ability to inspire his troops as through his military genius), Napoleon brought about a triumphant peace that made him the idol of France and, later, its absolute ruler.

Heir to the Revolution, Napoleon himself was not a revolutionary; rather he was a reformer and a modernizer, both liberator and autocrat. Looking to the Napoleonic wars that raged on the one hand, and to the new social order emerging on the other, Horne incisively guides readers through every aspect of Napoleon’s two-decade rule: from France’s newfound commitment to an aristocracy based on merit rather than inheritance, to its civil code (Napoleon’s most important and enduring legacy), to censorship, cuisine, the texture of daily life in Paris, and the influence of Napoleon abroad. At the center of Horne’s story is a singular man, one whose ambition, willpower, energy and ability to command changed history, and continues to fascinate us today.

ALISTAIR HORNE is the author of numerous books, including The Price of Glory, How Far from Austerlitz, and Seven Ages of Paris. A fellow of St. Anthony’s College, Oxford, he was educated at the Millbrook School in New York. He lives in England.