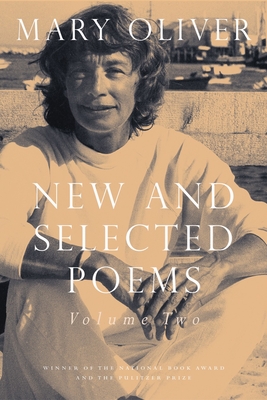 Understand, I am always trying to figure out
what the soul is,
and where hidden,
and what shape-

New and Selected Poems, Volume Two, an anthology of forty-two new poems-an entire volume in itself-and sixty-nine poems hand-picked by Mary Oliver from six of her last eight books, is a major addition to a career in poetry that has spanned nearly five decades. Now recognized as an unparalleled poet of the natural world, Mary Oliver writes with unmatched dexterity and a profound appreciation for the divergence and convergence of all living things.

Mary Oliver is always searching for the soul of things. In poem after poem, her investigations go from the humble green bean that nourishes her and makes her wonder if "something/-I can't name it-watches as I walk the/rows, accepting the gift of their lives/to assist mine" to the vast, untouchable bliss of "things you can't reach./But you can reach out to them, and all day long./The wind, the bird flying away./The idea of God." Oliver's search grows and is informed by experience, meditation, perception, and discernment. And all the while, during her quest, she is constantly surprised and fortified by joy.

This graceful volume, designed to be paired with New and Selected Poems, Volume One, includes new poems on birds, toads, flowers, insects, bodies of water, and the extraordinary experience of the everyday in our lives. In the words of Alicia Ostriker,'Mary Oliver moves by instinct, faith, and determination. She is among our finest poets, and still growing.' In both the older and new poems, Mary Oliver is a poet at the height of her control of image and language.

A private person by nature, Mary Oliver (1935–2019) gave very few interviews over the years. Instead, she preferred to let her work speak for itself. And speak it has, for the past five decades, to countless readers. The New York Times recently acknowledged Mary Oliver as “far and away, this country’s best-selling poet.” Born in a small town in Ohio, Oliver published her first book of poetry in 1963 at the age of 28; No Voyage and Other Poems, originally printed in the UK by Dent Press, was reissued in the United States in 1965 by Houghton Mifflin. Oliver has since published twenty books of poetry and six books of prose. As a young woman, Oliver studied at Ohio State University and Vassar College, but took no degree. She lived for several years at the home of Edna St. Vincent Millay in upper New York state, companion to the poet’s sister Norma Millay. It was there, in the late ’50s, that she met photographer Molly Malone Cook. For more than forty years, Cook and Oliver made their home together, largely in Provincetown, Massachusetts, where they lived until Cook’s death in 2005. Over the course of her long and illustrious career, Oliver has received numerous awards. Her fourth book, American Primitive, won the Pulitzer Prize for Poetry in 1984. She has also received the Shelley Memorial Award; a Guggenheim Fellowship; an American Academy and Institute of Arts and Letters Achievement Award; the Christopher Award and the L.L. Winship/PEN New England Award for House of Light; the National Book Award for New and Selected Poems; a Lannan Foundation Literary Award; and the New England Booksellers Association Award for Literary Excellence. Oliver’s essays have appeared in Best American Essays 1996, 1998, 2001; the Anchor Essay Annual 1998, as well as Orion, Onearth and other periodicals. Oliver was editor of Best American Essays 2009. Oliver’s books on the craft of poetry, A Poetry Handbook and Rules for the Dance, are used widely in writing programs. She is an acclaimed reader and has read in practically every state as well as other countries. She has led workshops at various colleges and universities, and held residencies at Case Western Reserve University, Bucknell University, University of Cincinnati, and Sweet Briar College. From 1995, for five years, she held the Catharine Osgood Foster Chair for Distinguished Teaching at Bennington College. She has been awarded Honorary Doctorates from The Art Institute of Boston (1998), Dartmouth College (2007) and Tufts University (2008).

Praise for the poetry of Mary Oliver:

"Far beneath the surface-flash of linguistic effect, Mary Oliver works her quiet and mysterious spell. It is a true spell, unlike any other poet's, the enchantment of the true maker."--James Dickey

"Oliver's often quiet persona almost always rides a storm of discovery . . . She continues to earn applause and admiration for continuing to provide redemptive mediation and supple praises for nature in a time when so much is under threat."--R. T. Smith, Shenandoah

"These are life enhancing and redemptive poems that coax the sublime from the subliminal."--Sally Connolly, Poetry

"Mary Oliver's poetry is fine and deep; it reads like a blessing. Her special gift is to connect us with our sources in the natural world, its beauties and terrors and mysteries and consolations."--Stanley Kunitz

"The gift of Oliver's poetry is that she communicates the beauty she finds in the world and makes it unforgettable."--Miami Herald