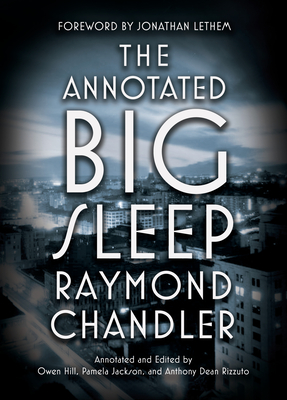 The first fully annotated edition of Raymond Chandler’s 1939 classic The Big Sleep features hundreds of illuminating notes and images alongside the full text of the novel and is an essential addition to any crime fiction fan’s library.

A masterpiece of noir, Raymond Chandler's The Big Sleep helped to define a genre. Today it remains one of the most celebrated and stylish novels of the twentieth century. This comprehensive, annotated edition offers a fascinating look behind the scenes of the novel, bringing the gritty and seductive world of Chandler's iconic private eye Philip Marlowe to life. The Annotated Big Sleep solidifies the novel’s position as one of the great works of American fiction and will surprise and enthrall Chandler’s biggest fans.

Including:
-Personal letters and source texts
-The historical context of Chandler’s Los Angeles, including maps and images
-Film stills and art from the early pulps
-An analysis of class, gender, sexuality, and ethnicity in the novel

RAYMOND CHANDLER (1888-1959) turned to writing fiction at the age of forty-five, after a career as an oil executive. He published his first story in Black Mask in 1933, and his first novel, The Big Sleep, in 1939. Over his lifetime, Chandler wrote seven novels, several screenplays, and numerous short stories, and became the master practitioner of American hard-boiled crime fiction.

OWEN HILL is the author of two mystery novels, a book of short fiction, and several books of poetry. He has reviewed crime novels for the Los Angeles Times and the East Bay Express. In 2005 he was awarded the Howard Moss residency for poetry at Yaddo. He is currently coediting the Berkeley Noir anthology, forthcoming in 2020. He works at Moe’s Books in Berkeley.

PAMELA JACKSON is an editor, scholar, and librarian specializing in California literary and cultural history. She holds a PhD from UC Berkeley and an MLIS from UCLA and was coeditor, with Jonathan Lethem, of The Exegesis of Philip K. Dick.

ANTHONY DEAN RIZZUTO is a professor of English at Sonoma State University, where he teaches (among other things) California ethnic literature and hard-boiled fiction. He is also a bookseller at Moe’s Books in Berkeley. He received his PhD from the University of Virginia.

From Jonathan Lethem's foreword to The Annotated Big Sleep

"Nothing, even a book as singular and archetypal as The Big Sleep, comes from nowhere. What a gift, to see in part how Chandler made it. Under just three names, these annotators number among them two poets, an archivist and literary scholar, a gifted crime novelist, and three sleuths; reading it conveys the vicarious thrill of their innumerable discoveries. Chandler lucked out."