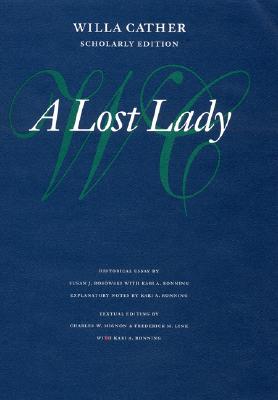 First published in 1923, A Lost Lady is one of Willa Cather’s classic novels about life on the Great Plains. It harks back to Nebraska’s early history and contrasts those days with an unsentimental portrait of the materialistic world that supplanted the frontier. In her subtle portrait of Marian Forrester, whose life unfolds in the midst of this disquieting transition, Cather created one of her most memorable and finely drawn characters. This Willa Cather Scholarly Edition of A Lost Lady is edited according to standards set by the Committee for Scholarly Editions of the Modern Language Association. The historical essay describes the origin, writing, and reception of the novel as well as motion pictures that were later based on it; and a selection of archival photographs illuminates the connection between the novel and the people and places from Cather’s formative years in Nebraska. Explanatory notes identify locations, literary references, persons, events, and specialized terminology. The textual essays describe the production and subsequent revisions of the text.

Susan J. Rosowski (1942-2004). Kari A. Ronning is assistant editor of the Cather Scholarly Edition. Charles W. Mignon and Frederick M. Link are professors emeritus of English at the University of Nebraska.

"This 1923 novel is among the best examples of Cather’s experiment with minimalism and one of her finest works overall. As such, it deserves an edition produced to the highest standards of textual scholarship. It has found one here."—Choice