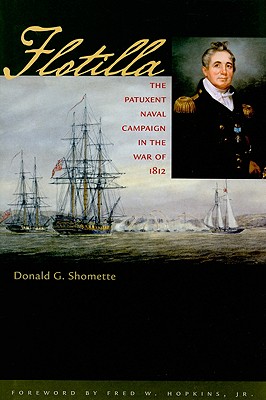 With the Royal Navy's offensives in the Chesapeake Bay during the War of 1812 came devastating raids that wreaked havoc on the small villages along its shores and the very economy of the region. American naval forces were incapable of wresting control of the Tidewater from the superior enemy forces. Then in 1814 Captain Joshua Barney, a rare American hero during the struggle, intrepidly led his Chesapeake Flotilla against the invaders, determined to contest their advance on the nation's capital and drive them from the region.

Donald G. Shomette, director of the archaeological excavation of the flotilla's flagship, substantially revises the first edition of this captivating history with new information about Barney, his crew, and the mosquito fleet of gunboats and war barges that so valiantly fought the British. He sheds new light on the efforts of the U.S. Flotilla Service to build a viable coastal defense force. Shomette details the construction and manning of the famed Chesapeake Flotilla and recounts the terrifying details of British attacks on the towns, plantations, and farms throughout the bay region.

Doomed from its conception by sparse funds and the natural limitations of the bay's coastline, the flotilla ultimately suffered defeat. Yet its efforts were not completely in vain. Turning back wave after wave of British attacks, the fleet earned an improbable victory at St. Leonard's Creek and its men went on to make heroic stands at the battles of Bladensburg and Fort McHenry in 1814.

The thoroughly updated and enlarged edition of Flotilla is the result of impressive research on a forgotten chapter in the development of the young nation's naval and maritime tradition.

Donald G. Shomette is a marine archaeologist and cultural resource manager in Dunkirk, Maryland. He is the author of many books, including Shipwrecks, Sea Raiders, and Maritime Disasters along the Delmarva Coast, 1632-2004, also published by Johns Hopkins.