Anthems We Love: 29 Iconic Artists on the Hit Songs That Shaped Our Lives (Hardcover) 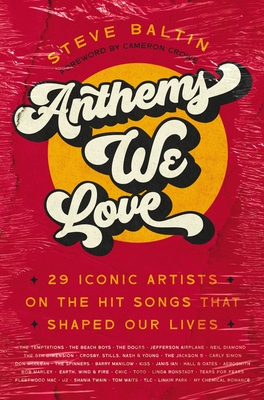 "Anthems We Love is not just a tale of artistic adventure, it's also a manual for artists and fans alike. There is no formula. Just these inspiring stories of the heart . . . " --Cameron Crowe, Academy Award-nominated director, producer, and screenwriter (Jerry Maguire, Almost Famous, Say Anything, and Pearl Jam Twenty)

From U2 to Carly Simon, the Temptations to TLC, artists describe in their own words how their songs became the soundtrack of your life in this celebration of music featuring original interviews by acclaimed music journalist Steve Baltin.

Which Beach Boys' song brings Paul McCartney to tears? What makes "Light My Fire" a rite-of-passage song for teens in every generation, according to Doors guitarist Robby Krieger? What is it about music that brings back so vividly the passion of our early loves, our deepest losses, our richest memories?

Acclaimed music journalist Steve Baltin examines twenty-nine iconic songs of modern music to ultimately answer: what transforms a song into an anthem? How did these songs become such a part of our culture? Featuring original interviews with superstar musicians like the Beach Boys, Shania Twain, and Earth Wind and Fire, this book offers a detailed celebration of songwriting, fan connections, memorable live performances, and more.

A must-have anthology for music fans, Anthems We Love showcases the most beloved and popular songs of all time, including Neil Diamond's "Sweet Caroline," the Jackson 5's "ABC," Aerosmith's "Walk This Way," and TOTO's "Africa." More so, it centers the artists behind these songs--and the songs that formed the soundtracks of their lives--as they share stories, for the first time, about how writing an anthem has changed their lives, those of their fans, and our world.