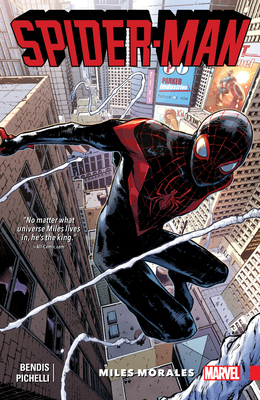 Miles Morales is hitting the big time! Not only is he joining the Marvel Universe, but he's also a card-carrying Avenger, rubbing shoulders with the likes of Iron Man, Thor and Captain America! But how have Miles' first eight months been, coming to grips with an All-new, All-Different new York? One thing is the same--nonstop action! Like when Earth's Mightiest Heroes all fall, and Miles stands alone against a villain with the power to destroy the universe. Or when the Black Cat tries to get her claws in this new Spider-Man. Then there's Miles' toughest foe yet--his grandmother! But his grades might be his biggest challenge...maybe a study session (date?) with fellow Avenger Ms. Marvel might help? Not likely! Don't miss the start of Miles Morales' adventures in the Marvel Universe!

Brian Michael Bendis is an American comic book writer and former artist. He has won critical acclaim, including five Eisner Awards for both his creator-owned work and his work on various Marvel Comics books.

Starting out with crime and noir comics, Bendis eventually moved to mainstream superhero work. With Bill Jemas and Mark Millar, Bendis was the primary architect of the Ultimate Marvel Universe, launching Ultimate Spider-Man in 2000, on which he continues as writer to the present day. He relaunched the Avengers franchise with New Avengers in 2004, and has also written the Marvel "event" storylines "Secret War" (2004), "House of M" (2005), "Secret Invasion" (2008), "Siege" (2010) and "Age of Ultron" (2013).

In addition to writing comics, he has also worked in television, video games and film, and taught writing at Portland State University. He will begin teaching at University of Oregon starting in Fall 2013, and his book Words for Pictures will be out in Spring 2014 from Random House