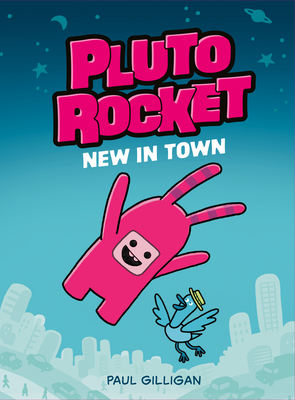 Meet Pluto Rocket, a friendly alien, and Joe Pidge, a wise-cracking pigeon, in the first book of this hilarious new early graphic novel series, for fans of Narwhal and Jelly and Pizza and Taco!

Joe Pidge, not just a pigeon but also the stylish king of the neighborhood, is bobbing his way down the street one day when, all of a sudden, Pluto Rocket enters the scene. It turns out, Pluto is from another planet, and is disguising herself for her secret mission — to find out what life in the neighborhood is really like.

Lucky for Pluto, Joe Pidge has seen it all before, eaten it all before, and pooped on it all before, so he takes her under his wing and the two become fast friends. But Joe is the one who actually learns a thing or two and whose mind is blown by the out-of-this-world Pluto in this hilarious graphic novel series from Paul Gilligan, creator of the syndicated comic strip Pooch Cafe!

PAUL GILLIGAN writes and draws the syndicated comic strip Pooch Cafe with Andrews McMeel, which runs in over 250 newspapers around the world and has been twice nominated by the National Cartoonist Society for best strip. He is also the author-illustrator of King of the Mole People, which is in development for an animated series with Portfolio Entertainment, and its sequel, Rise of the Slugs. He also has other animated shows in development with Guru Animation and The Cartoon Network. Paul is based in Toronto, Ontario.