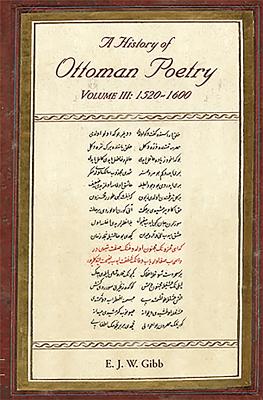 The History of Ottoman Poetry, first published in six volumes between 1900 and 1909, was the principal product of E.J.W. Gibb's devotion to Ottoman Turkish literature. By the time of his early death in 1901 only the first volume had appeared in print. The remainder was almost complete and was seen through the press by Gibb's friend and literary executor, the Persian scholar E. G. Browne. The History was designed to provide the first extended account in English of Ottoman literature. The first four volumes cover four developmental phases, largely under the influence of Persian literature, from around 1300 to the middle of the nineteenth century. The fifth volume introduces the 'New School' of Ottoman poetry produced in Gibb's own era and inspired by French models. The sixth volume contains in Ottoman printed script the texts of all works quoted in English translation in the previous volumes. No comparable study has appeared in English since Gibb's magnum opus. His History of Ottoman Poetry has become a classic work which is still widely referred to and valuable for students, scholars and anyone with a general interest in Middle Eastern literature and culture.
Volume III (originally published 1904) covers both the second part of the 'classical age' of Ottoman poetry, from 1520 to the early seventeenth century, and the subsequent 'late classical age' to c. 1700. In Gibb's understanding, this was the era of greatest Persian influence upon Ottoman poetry, and was at its most brilliant in the reign of S leyman (1520-66). The majority of the most well known Ottoman poets flourished in these two centuries, drawn from all walks of life and many parts of the empire, from the chief jurisconsult Yahya Efendi (d. 1644) and the chief judge Baki (d. 1600), to the Nakshbandi sufi Lami'i elebi of Bursa (d. 1531), Fuzuli of Baghdad (d. 1556), the Albanian-born soldier Yahya Bey (d. 1575), the satirist Nef'i from Erzurum (executed c. 1635), and the man of letters from Urfa, Nabi Efendi (d. 1712). In addition, eight of the most popular verse romances written in this period are summarised in an appendix.