The Secret Life of Fish: The Astonishing Truth about our Aquatic Cousins (Hardcover) 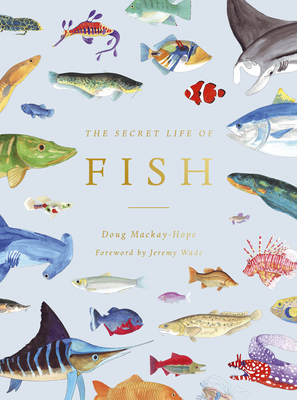 Discover the astonishing truth about our aquatic cousins: how they think and what they know, their experiences and unique behaviours, and the many things we have in common.

There are 33,000 species of fish on our planet, and that number is constantly increasing. In context, that is more than all the species of mammals, birds, amphibians and reptiles added together, making fish the most numerous vertebrates on our planet. Waters worldwide are teeming with these elusive creatures, but how much do we really know about them?

Grouped into thematic chapters – including the Dangerous and Deadly,Unusual Giants and Mini Marvels – in this comprehensive book biologist Doug Mackay-Hope profiles the secret lives of 50 of our most interesting underwater cousins in an insightful and myth-busting study, complete with charming watercolour diagrams and expert insights.

Learn about the White-Spotted Pufferfish, whose spines hide a deadly toxin, or the Ocellate River Stingray, who lurks in the rivers of South America and who can kill with just one touch of it's barbed stinger. Meet Bargibant's Pygmy Seahorse, who measures just 2cm in length, as well as the enourmous Whale Shark, which grows to around 13m in length. Be fascinated by the wierd creatures of the deep ocean, such as the Peter's Elephantnosed Fish or the kaleidescopic Picasso's Triggerfish.

With a foreword by Jeremy Wade, presenter of River Monsters and Mighty Rivers, and official fish aficionado, this book is a complete compendium of fascinating fish facts, with maps showing where in the globe they can be found, plus facts on how they live, hunt and escape predators.

Beautiful illustrations and photographs accompany each entry, as well as interesting facts on how they evolved to adapt tochanging environments, making this book the perfect guide to all things aquatic.

Doug Mackay-Hope is Head of Development for BBC’s Natural History Unit in Bristol (producers of Planet Earth and Blue Planet II). He has worked directly with David Attenborough. He is a trained biologist having studied at Imperial College in London before moving into television natural history filmmaking. He began his career conceiving and developing BAFTA-winning Big Blue Live and Attenborough & The Giant Dinosaur. His first responsibilities ranged from quirky children’s shows that involved deadly animals to a man hunting freshwater monsters in far-flung corners of the world for international hit River Monsters, which helped to fed his fascination with fish.