Once Upon an American Dream: The Story of Euro Disneyland (Culture America) (Hardcover) 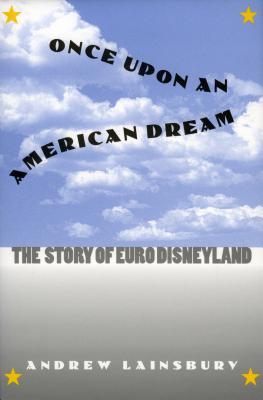 Branded a "cultural Chernobyl" and the "tragic kingdom," the Euro Disney Resort has been on its own thrill ride since opening in 1992. The much publicized version of the Magic Kingdom gave Europeans alcohol-free "mocktails," surly employees, even colors too muted for the Disney image. Facing financial disaster, was it any wonder that Disney execs found themselves wishing upon a star for answers? After so many knee-jerk criticisms of Euro Disney, this book combines firsthand experience and research to shed new light on claims that the park is nothing more than a form of American cultural imperialism. Andrew Lainsbury, a former Euro Disney employee who knows what the park meant to its visitors, goes beyond media bites and academic scorn to examine Europe's love/hate relationship with Euro Disneyland and some of the undiscussed issues surrounding it. Once Upon an American Dream is a story of global capitalism on a grand scale. Lainsbury has plumbed company archives and interviewed key players to give readers the real view from Le Chateau de la Belle au Bois Dormant (Sleeping Beauty's Castle). He cracks open the Euro Disney controversy to reveal the park not as a tragic experiment in exporting American culture but the result of European efforts to import a popular form of American entertainment. Lainsbury tells how the Walt Disney Company came to build a European park and locate it in France, how political negotiations affected its design and development, how it was promoted to continental audiences, and what caused its widely publicized financial woes before being rescued by a real prince from Saudi Arabia. He reveals what it took to win back the hearts of skeptical Europeans--such as serving wine, selling flashy merchandise, and placating disgruntled workers. Finally, he looks into the magic mirror to speculate on the role of Euro Disney and the Walt Disney Company in the twenty-first century. Ultimately, Lainsbury shows that cultural imperialism is not an exclusively American phenomenon but a global corporate strategy--and that global corporatism, by needing to be responsive to consumers, is so complex that it may not be as monolithic as feared. Once Upon an American Dream is a fairy tale for our times, reminding us that, for all the critical huffing and puffing, the creation and marketing of pleasure is what Euro Disneyland is all about.