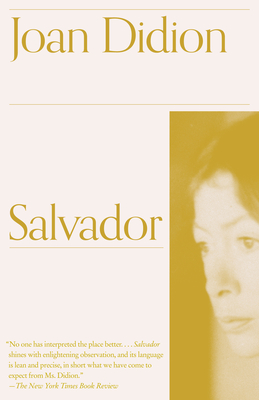 "Terror is the given of the place." The place is El Salvador in 1982, at the ghastly height of its civil war. Didion "brings the country to life" (The New York Times), delivering an anatomy of a particular brand of political terror—its mechanisms, rationales, and intimate relation to United States foreign policy.

As ash travels from battlefields to body dumps, Didion interviews a puppet president, and considers the distinctly Salvadoran grammar of the verb "to disappear." Here, the bestselling, award-winning author of The Year of Magical Thinking and Let Me Tell You What I Mean gives us a book that is germane to any country in which bloodshed has become a standard tool of politics.

JOAN DIDION was born in Sacramento in 1934 and graduated from the University of California, Berkeley, in 1956. After graduation, Didion moved to New York and began working for Vogue, which led to her career as a journalist and writer. Didion published her first novel, Run River, in 1963. Didion’s other novels include A Book of Common Prayer (1977), Democracy (1984), and The Last Thing He Wanted (1996).

In 2005, Didion was awarded the American Academy of Arts & Letters Gold Medal in Criticism and Belles Letters. In 2007, she was awarded the National Book Foundation’s Medal for Distinguished Contribution to American Letters. A portion of National Book Foundation citation read: "An incisive observer of American politics and culture for more than forty-five years, Didion’s distinctive blend of spare, elegant prose and fierce intelligence has earned her books a place in the canon of American literature as well as the admiration of generations of writers and journalists.” In 2013, she was awarded a National Medal of Arts and Humanities by President Barack Obama, and the PEN Center USA’s Lifetime Achievement Award.

Didion said of her writing: "I write entirely to find out what I’m thinking, what I’m looking at, what I see and what it means.” She died in December 2021.

"No one has interpreted the place better.... Salvador shines with enlightening observation, and its language is lean and precise, in short what we have come to expect from Ms. Didion." —The New York Times Book Review

"[Didion has] the instincts of an exceptional reporter and the focus of a historian [as well as] a novelist's appreciation for the surreal. . . . Her clarity of style illuminates the vast darkness that engulfs El Salvador." —Los Angeles Times Book Review

"Everything [Didion] writes grows out of close observation of the social landscape of El Salvador. And it is quite impossible to deny the artistic brilliance of her reportage. She brings the country to life so that it ends up invading our flesh." —The New York Times