Who Is Zendaya? (Who HQ Now) (Paperback) 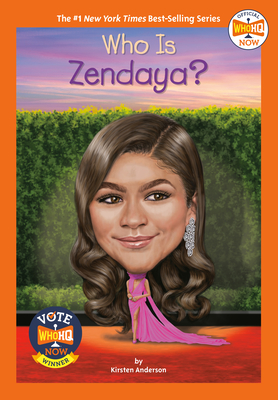 Kids voted for who they wanted to learn about in the next WhoHQ Now title and the #1 New York Times bestselling series now features one of Hollywood's brightest young stars... Zendaya!

Zendaya began her acting career at age thirteen when she landed one of the starring roles in the Disney Channel’s Shake It Up. Since then, the actress has not slowed down, starring in action-packed superhero films, dazzling movie musicals, and highly acclaimed TV shows. At only twenty-four, Zendaya won her first Primetime Emmy Award for her performance in the hit TV show Euphoria. The Hollywood star is an actress, singer, model, style icon, and also an activist who advocates for causes like feminism, anti-bullying, anti-racism, and voter registration. Learn all about the star-studded career and the inspiring life of Zendaya in this new book that was voted for by young readers worldwide!

Kirsten Anderson is a writer and actress who lives in New York City with her charming Pomeranian, Sunflower. She has written several biographies for children, including Who Was Andy Warhol? and Who Is Kamala Harris?