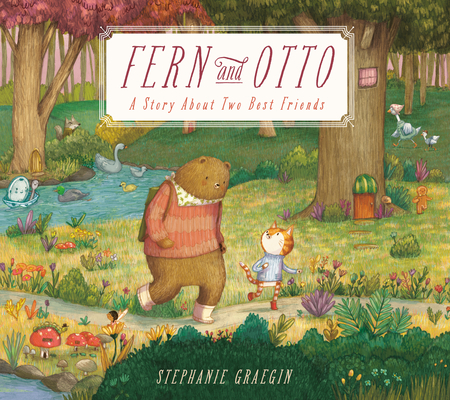 “Fern and Otto is a beautiful celebration of discovery, adventure, and friendship. It is a charming reminder that all of life’s experiences are more exciting when shared with friends! A sweet story that will resonate with kids of all ages.”
— Anderson McKean, Page and Palette, Fairhope, AL

Perfect for fans of Erin Stead and Emily Winfield Martin, here is a charming paperback picture book about two friends who enter a fairy-tale world hoping to find an exciting story to tell.

When best friends Fern, a bear, and Otto, a cat, go searching for an exciting story in the forest, they have different ideas about what that means. Fern thinks they should stop and watch a race between a tortoise and a hare, but Otto worries that a tortoise is too slow to be exciting. Fern thinks listening to the three brothers talking about how to build a house is incredibly interesting, but Otto isn't convinced. Along the way, the two friends meet a little girl in red who is off to visit her grandmother (and a wolf headed the same way!), a cranky girl complaining that her porridge isn't the right temperature, and many others. But it's not until they run into a big scary witch that they can both agree: this is not the kind of excitement they had in mind. With irresistible illustrations and tons of charming details, this is a delightful fantasy that proves the best adventures are the ones you share.

Stephanie Graegin received her BFA from the Maryland Institute College of Arts and her MFA in printmaking from the Pratt Institute. Graegin's authorial debut, Little Fox in the Forest, garnered five starred reviews and appeared on many Best of the Year lists. She is also the illustrator of several books for children, including The Lost Gift by Kallie George; Water in the Park by Emily Jenkins, which received three starred reviews; Peace Is an Offering by Annette LeBox; and How to Share with a Bear by Eric Pinder. Stephanie lives in Brooklyn, New York. Visit her at graegin.com.

Praise for Fern and Otto:

Praise for Little Fox in the Forest:

"Young children will pore over this wordless picture book again and again, finding something new to enjoy each time." —Kirkus, starred review

"This is a story not just to read but to inhabit." —Publishers Weekly, starred review

"Viewers can pick up skills in decoding visual narrative while also getting a chance to breathlessly root around in some serious cuteness." —Bulletin, starred review