The Outlaws Scarlett and Browne (Hardcover) 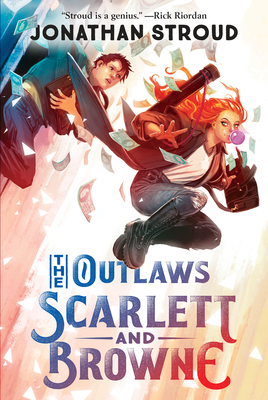 This is book number 1 in the Scarlett and Browne series.

**Soon to be a motion picture starring Phoebe Dynevor of Bridgerton!**

Scarlett McCain is a shoot-first ask-questions-later kind of outlaw. She scrapes by on bank heists, her wits—and never looking back.

She’s on the run from her latest crime when she comes across Albert Browne. He is the sole survivor of a horrific accident, and against her better judgement, Scarlett agrees to guide him to safety.

This is a mistake. Soon there are men with dogs and guns and explosives hot on their heels. Scarlett’s used to being chased by the law, but this is extreme. It was only a little bank she’d robbed . . .

As they flee together across the wilds, fighting off monstrous beasts, and dodging their pursuers, Scarlett comes to realize that Albert Browne is hiding a terrible secret. And that he may be the most dangerous threat of all.

In this fast-paced, quick-witted whirlwind of a story, Jonathan Stroud introduces two unlikely allies—the outlaws Scarlett and Browne—who are about to become the most notorious renegades in all that’s left of Britain.

Jonathan Stroud is the author of the New York Times bestselling Bartimaeus trilogy, the Lockwood & Co. series, and the stand-alone titles Heroes of the Valley, The Leap, The Last Siege, and Buried Fire. He lives in England with his wife, Gina, and their three children. To learn more, visit jonathanstroud.com.

"The vivid setting, rapid-fire dialogue, and nonstop action will propel readers through this raucous, rousing rumble. A blast for action fans, with potential for a long run." —Kirkus Reviews, starred review

"Just the kind of setting where adventure fantasy thrives. Add razor-sharp banter and you can lay the smart money on another Stroud winner." —Bulletin, starred review

"Stroud’s world building is exceptional, his compelling characters easy to root for. There’s real suspense and surprise, along with some truly terrifying moments, though plenty of banter and scheming keeps things fun." — Booklist

"Intricate worldbuilding and a compelling heroine will appeal to readers who like “Rick Riordan Presents,” as well as the works of Philip Pullman and Garth Nix." —School Library Journal