Weapons of Mass Delusion: When the Republican Party Lost Its Mind (Hardcover) 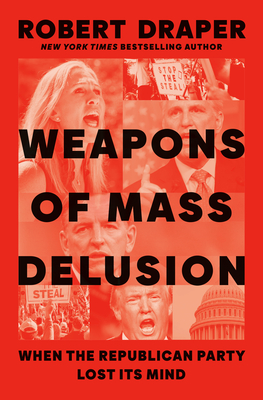 The disturbing eyewitness account of how a new breed of Republicans—led by Marjorie Taylor Greene, Paul Gosar, Matt Gaetz, Lauren Boebert, and Madison Cawthorn—far from moving on from Trump, have taken the politics of hysteria to even greater extremes and brought American democracy to the edge

The violent insurrection at the U.S. Capitol on January 6, 2021, was a terrible day for American democracy, but many people dared to hope that at least it would break the fever that had overcome the Republican Party and banish Trump's relentless lies about the stealing of the 2020 election. That is not what happened. Instead, “the big steal” has become dogma among an ever-higher percentage of American Republicans. What happened to the Republican Party, and America, during the Trump presidency is a story we more or less think we know. What has happened to the party since, it turns out, is even more disquieting. That is the story Robert Draper tells in Weapons of Mass Delusion.

Through his extraordinarily intrepid cross-country reporting, Draper chronicles the road from January 6 to the 2022 midterms among the Republican base and in the U.S. Congress, rendering unforgettable portraits of how Marjorie Taylor Greene and her ilk came to shape their party’s terms of engagement to an extent that would have been unimaginable even five years ago. He also brings to life the efforts of a dwindling group of Republicans who are willing to push back against the falsehoods, in the face of a group of ascendent demagogues who are merrily weaponizing them. With a base whipped up into a perpetual frenzy of outrage by conspiracy theories—not just about the big steal but about COVID and vaccines, pedophilia and Antifa and Black Lives Matter and George Soros and President Obama, and on and on and on—the forces of reason within the GOP are on the defensive, to put it mildly. The book also benefits greatly from reporting conducted in Texas, Arizona, Georgia, New Hampshire, and other bellwether states in the country of the mind one might call a fever of undending conspiracies.

Robert Draper has been a wise, fearless, and fair-minded chronicler of the American political scene for over twenty-five years. He has seen the good, the bad, and the ugly. He has never seen it this ugly. Ultimately, this book tells the story of a fearful test of our ability, as a country, to hold together a system of government grounded in truth and the rule of law. Written on the eve of the 2022 midterm elections, Draper’s account of a party teetering on the precipice of madness reveals how the GOP fringe became its center of gravity.

Robert Draper is a contributing writer for the New York Times Magazine and National Geographic Magazine. He is the author of several books, including the New York Times bestseller, Dead Certain: The Presidency of George W. Bush. He lives in Washington D.C. with his wife, Kirsten Powers.

“Vital and indispensable . . . [Draper’s] rigorous reporting adds an unusual level of depth . . . The book’s first section, ‘One Day in Washington,’ will be consumed by most readers in a single breathless gulp. For an event as widely reported as the insurrection at the Capitol has been, Draper provides a startling level of new, first-person detail. We have watched the hearings. We have read the newspaper accounts of that dreadful day. But Draper’s extensive interviews with 150 sources pierce the staid facts with vivid humanity . . . Fighting falsehood is all that matters if democracy is to survive, and Draper comes with the fiercest weapon yet: the truth.” —The Washington Post

“Draper provides pungent new anecdotes about and original analysis of the most outrageous actors [in the Trump era].” —The Guardian

“A masterpiece of meticulous reporting.” —George Will, Washington Post columnist

“Vastly adds to our understanding of the Trump era.” —Politico

“A must read.” —POLITICO Playbook

“Excellent . . . In focusing on Trump’s enablers in Congress and elsewhere, Draper helps to show why the fringe became the center in the GOP—and why it isn’t going away anytime soon.” —Jacob Heilbrunn, Washington Monthly

“A seamless, terrifying, inside-the-room account—and an unsparing one, at that—about how the Republicans went from the party of Liz Cheney to the party of Marjorie Taylor Greene.” —Julia Ioffe, Puck