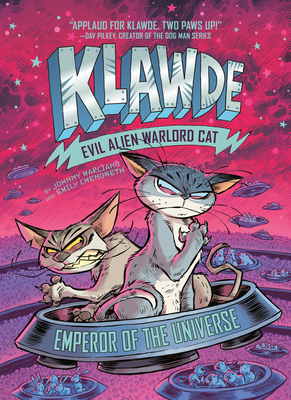 This is book number 5 in the Klawde: Evil Alien Warlord Cat series.

My 7year old loved this! He's a big Dogman fan.

"Funny, savage, and brilliant, Klawde is the pet I wish I had."--Max Brallier, New York Times Bestselling author of The Last Kids on Earth.

Following a humiliating, defeated effort to conquer Earth, Klawde has had it with this this dismal planet. And anyway, what's the point in conquering such an insignificant corner of the galaxy, when there's an entire universe to rule? Luckily for Klawde, the position of Emperor of the Universe is now open for the taking.

So with Barx and Raj by his side, and enemies around every corner, Klawde begins the campaign of his life. Can he win enough hearts and minds to become . . . Emperor of the Universe?

Heavily illustrated, with a hilarious, biting voice that switches between Raj's and Klawde's perspectives, this is the story of an unlikely friendship that emerges between a boy and the evil cat who arrived on his doorstep.

Johnny Marciano is a New York Times bestselling author and illustrator. His books for kids range from The Witches of Benevento series to The No-Good Nine to Madeline at the White House, while his nonfiction work includes Anonyponymous. Johnny lives in Headquarters, New Jersey, with his wife, nine-year-old daughter, two cats, and a dog.

Emily Chenoweth is the author of Hello Goodbye and the ghostwriter of several young adult New York Times Bestsellers. Under the name Emily Raymond, she has co-authored eight books with James Patterson, including First Love, Expelled, and Witch & Wizard: The Lost. She lives in Portland, Oregon, with her partner, the writer Jon Raymond, and their two daughters.

Robb Mommaerts is an illustrator living and working in the frigid state of Wisconsin. He hasn't changed much from his childhood years in the fact that he still mostly loves drawing monsters, dinosaurs, and robots. From his basement dungeon, he works primarily in the world of game art, children's books, character design, and comics.

When not attempting to put the strange daydreams from his head to paper, he and his wife are trying to keep up with two kids and a dog.