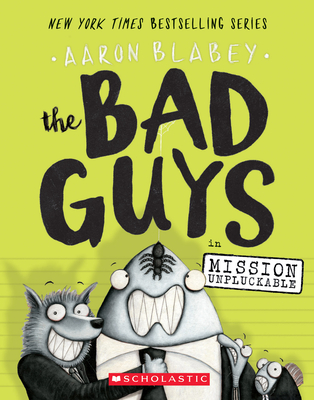 This is book number 2 in the The Bad Guys series.

NOW A MAJOR MOTION PICTURE!"I wish I'd had these books as a kid. Hilarious!" -- Dav Pilkey, creator of Captain Underpants and Dog ManThey may look like Bad Guys, but these wannabe heroes are doing good deeds...whether you like it or not! This New York Times bestselling illustrated series is perfect for fans of Dog Man and Captain Underpants.The Bad Guys next mission? Rescue 10,000 chickens from a high-tech cage farm. But they are up against sizzling lasers, one feisty tarantula, and their very own Mr. Snake...who's also known as "The Chicken Swallower." What could possibly go wrong?Get ready to laugh up your lunch with the baddest bunch of do-gooders in town!

AARON BLABEY has written many well-loved, bestselling books for children. He is the creator of three hugely successful series for children — the New York Times bestselling The Bad Guys (Les méchants), Pig the Pug (Carlos le carlin), and Thelma the Unicorn (Thelma la licorne). The Bad Guys movie released in 2022. It was produced by DreamWorks Animation with Aaron serving as an executive producer on the project.