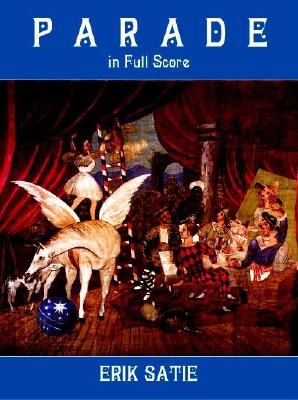 Although his name was associated with fashionable artistic movements of early twentieth-century Paris -- Cubism, Surrealism, Dadaism, and Neoclassicism -- Erik Satie followed his own light, never belonging to any group or adopting a particular doctrine. A true nonconformist, he struck out on his own path to develop a musical structure reflecting his unique personality and eccentricities, anticipating artistic tendencies that others shaped into dogma.
Satie's 1916 ballet Parade, created in collaboration with three leading artists of the period, was hailed as a Cubist manifesto. Jean Cocteau created the idea for the production; Pablo Picasso designed sets and costumes; and L onide Massine choreographed the production and danced in the premiere performance of May 18, 1917. Stripped of subjective emotion, the work removes basic fragments of melody and simple harmonies from their conventional associations and recasts them in unexpected but logical patterns -- a practice similar to the Cubist painters' transformation of everyday items into novel configurations.
This inexpensive full score will be treasured by music lovers and all admirers of this uniquely influential twentieth-century composer.

French composer Erik Satie (1866-1925) exercised a profound effect on 20th-century music, creating innovative harmonies with a freedom of form and mastery of musical understatement that influenced modern masters from Debussy and Ravel to Milhaud, Poulenc, and Cage.