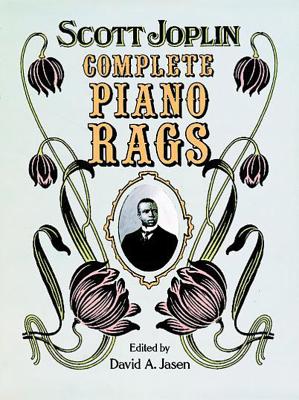 Throughout history, few musical crazes have hit with such impact, had such a heyday and lingered so hauntingly as ragtime. Ragtime arrived on the upswing of Tin Pan Alley, when the popularity of pianos in the home was reaching its peak and an endless stream of sheet music flowed out to meet the demand. In the early 1900s, no name was more prominent on those sheet-music covers and no one wrote ragtime music more brilliantly than Scott Joplin.
This wonderful book brings together in one superbly produced playing edition all thirty-eight of Scott Joplin's piano rags, including his six collaborations, plus Joplin's own primer on how to play ragtime, the School of Ragtime. Each rag has been reprinted, along with its sheet-music cover, from the original publisher's edition.
At the Williams' Brothers saloon in Sedalia, Missouri, Scott Joplin was known as The Entertainer, and in 1897, in the upstairs room called the Maple Leaf Club, he wrote the rag that would one day be the first to sell over a million copies in sheet-music form. In time the Maple Leaf Rag also became the most recorded composition on piano roll, with forty known versions.
Most of Joplin's other rags were hits as well. Many bear the playful names that were given most rags, names like The Strenuous Life, Heliotrope Bouquet, and his last published piece, the Silver Swan Rag. One of them, The Entertainer, triggered a major revival of interest in his work when it was incorporated into the score of the popular film The Sting. All of them are here, each bearing the mark of Joplin's supreme originality. As ragtime authority David A. Jasen observes in his Introduction: For pianists everywhere, this folio contains ragtime masterpieces which, when learned, will provide unlimited joy.