The Grandest Stage: A History of the World Series (Hardcover) 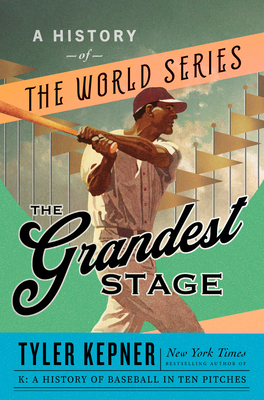 From the New York Times bestselling author of K: A History of Baseball in Ten Pitches comes the ultimate history of the World Series—a vivid portrait of baseball at its finest and most intense, filled with humor, lore, analysis, and fascinating behind-the-scenes stories from 117 years of the Fall Classic.

The World Series is the most enduring showcase in American team sports. It’s the place where legends are made, where celebration and devastation can hinge on a fly ball off a foul pole or a grounder beneath a first baseman’s glove. And there’s no one better to bring this rich history to life than New York Times national baseball columnist Tyler Kepner, whose bestselling book about pitching, K, was lauded as “Michelangelo explaining the brush strokes on the Sistine Chapel” by Newsday.

In seven scintillating chapters, Kepner delivers an indelible portrait of baseball’s signature event. He digs deep for essential tales dating back to the beginning in 1903, adding insights from Hall of Famers like Reggie Jackson, Mike Schmidt, Jim Palmer, Dennis Eckersley and many others who have thrived – and failed – when it mattered most.

Why do some players, like Madison Bumgarner, Derek Jeter and David Ortiz, crave the pressure? How do players handle a dream that comes up short? What’s it like to manage in the World Series, and what are the secrets of building a champion? Kepner celebrates unexpected heroes like Bill Wambsganss, who pulled off an unassisted triple play in 1920, probes the mysteries behind magic moments (Did Babe Ruth call his shot in 1932? How could Eckersley walk Mike Davis to get to Kirk Gibson in 1988?) and busts some long-time myths (the 1919 Reds were much better than the Black Sox, anyway).

The Grandest Stage is the ultimate history of the World Series, the perfect gift for all the fans who feel their hearts pounding in the bottom of the ninth inning of Game Seven.

TYLER KEPNER is the author of the New York Times bestseller K: A HISTORY OF BASEBALL IN TEN PITCHES. He has covered every World Series game of the last two decades for The New York Times. He started his career as a teenager, interviewing players for a homemade magazine in the early 1990s. He attended Vanderbilt University on the Grantland Rice/Fred Russell sportswriting scholarship, then covered the Angels for the Riverside (Calif.) Press-Enterprise and the Mariners for the Seattle Post-Intelligencer. He joined The New York Times in 2000, covering the Mets for two seasons, the Yankees for eight, and serving as the national baseball writer since 2010.

"The best baseball writer in the nation" — Dan Shaughnessy, The Boston Globe

"In these pages fans relive the landmarks of the game they remember and discover the ones they missed while they were watching football or the NBA... Kepner is an enlightened and enlightening tour guide”
— Wall Street Journal

"Kepner... hits it out of the park in delivering spellbinding historical stories in a fascinating exploration of key World Series moments [.] Readers and fans will bask in an exciting front-row seat"
— Shelf Awareness

"A history of the World Series, one the oldest and most venerable of American sports institutions, could feel a bit daunting for readers. Not so with Kepner's engaging account, which is anything but a staid chronological breakdown... even casual followers will find his enthusiasm infectious, making this a perfect addition to any library’s baseball collection."
— Booklist

“A quirky and engrossing celebration of the Series. Throughout, Kepner’s love of the game is infectious. His passion and experience as a sports columnist come together to make each story lively and compelling. Reading “The Grandest Stage,” bouncing from story to story, feels like having an all-night-long chat with a fellow baseball-obsessed friend.”
— Christian Science Monitor

“Encyclopedic knowledge and a spry pen…Mr. Kepner strikes the right balance between reverence for the game’s legends and respect for the randomness in outcome its difficulty ensures…’The Grandest Stage’ is full of unexpected facts and lists sure to stir debate through the cold months between the final out of the World Series and the first toss of spring training.”
— New York Sun

“When it comes to writing a book on the World Series, Tyler Kepner is plenty qualified, and not just because he has covered every World Series for the New York Times for the last 20 years. Kepner’s passion for “The Grandest Stage,” as his new book is called, goes back decades before that.”
— San Bernadino Sun

“In "The Grandest Stage," author Tyler Kepner reveals the moments behind the moments that illustrate the power of winning a championship”
— Daily Bulletin

“A unique look at the Fall Classic's 117 years, with the story told in seven chapters, which mirrors the most games that can be played in the series.”
— Brooklyn Digest