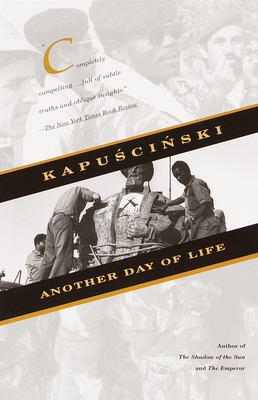 In 1975, Angola was tumbling into pandemonium; everyone who could was packing crates, desperate to abandon the beleaguered colony. With his trademark bravura, Ryszard Kapuscinski went the other way, begging his was from Lisbon and comfort to Luanda—once famed as Africa's Rio de Janeiro—and chaos.Angola, a slave colony later given over to mining and plantations, was a promised land for generations of poor Portuguese. It had belonged to Portugal since before there were English-speakers in North America. After the collapse of the fascist dictatorship in Portugal in 1974, Angola was brusquely cut loose, spurring the catastrophe of a still-ongoing civil war. Kapuscinski plunged right into the middle of the drama, driving past thousands of haphazardly placed check-points, where using the wrong shibboleth was a matter of life and death; recording his imporessions of the young soldiers—from Cuba, Angola, South Africa, Portugal—fighting a nebulous war with global repercussions; and examining the peculiar brutality of a country surprised and divided by its newfound freedom.Translated from the Polish by William R. Brand and Katarzyna Mroczkowska-Brand.

Ryszard Kapuscinski, Poland's most celebrated foreign correspondent, was born in 1932. After graduating with a degree in history from Warsaw University, he was sent to India, Pakistan, and Afghanistan to report for the Polish news, which began his lifelong fascination with the Third World. During his four decads reporting on Asia, Latin America, and Africa, he befriended Che Guevara, Salvador Allende, and Patrice Lumumba; witnessed twenty-seven coups and revolutions; and was sentenced to death four times.His earlier books—Shah of Shahs (about the Iranian Revolution), The Emperor (about the fall of Ethiopia's Haile Selassie), Imperium (about the fall of the Soviet Union), Another Day of Life (about the last days of Portuguese Angola), and The Soccer War (a compendium of reportage from the Third World)—have been translated into nineteen languages. He died on Jan. 23, 2007.

?Despite Kapuscinski?s insistence that 'the image of war is not communicable.' He has done just that and done it very well.??Newsweek