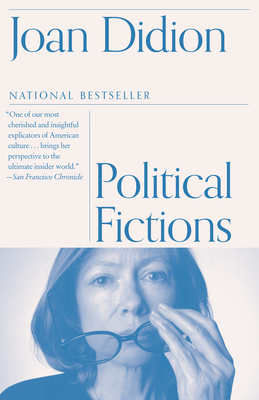 NATIONAL BESTSELLER • In these coolly observant essays, the iconic bestselling writer looks at the American political process and at "that handful of insiders who invent, year in and year out, the narrative of public life."

Through the deconstruction of the sound bites and photo ops of three presidential campaigns, one presidential impeachment, and an unforgettable sex scandal, Didion reveals the mechanics of American politics. She tells us the uncomfortable truth about the way we vote, the candidates we vote for, and the people who tell us to vote for them. These pieces build, one on the other, into a disturbing portrait of the American political landscape, providing essential reading on our democracy.

JOAN DIDION was born in Sacramento in 1934 and graduated from the University of California, Berkeley, in 1956. After graduation, Didion moved to New York and began working for Vogue, which led to her career as a journalist and writer. Didion published her first novel, Run River, in 1963. Didion’s other novels include A Book of Common Prayer (1977), Democracy (1984), and The Last Thing He Wanted (1996).

In 2005, Didion was awarded the American Academy of Arts & Letters Gold Medal in Criticism and Belles Letters. In 2007, she was awarded the National Book Foundation’s Medal for Distinguished Contribution to American Letters. A portion of National Book Foundation citation read: "An incisive observer of American politics and culture for more than forty-five years, Didion’s distinctive blend of spare, elegant prose and fierce intelligence has earned her books a place in the canon of American literature as well as the admiration of generations of writers and journalists.” In 2013, she was awarded a National Medal of Arts and Humanities by President Barack Obama, and the PEN Center USA’s Lifetime Achievement Award.

Didion said of her writing: "I write entirely to find out what I’m thinking, what I’m looking at, what I see and what it means.” She died in December 2021.

“One of our most cherished and insightful explicators of American culture...brings her perspective to the ultimate insider world.” –San Francisco Chronicle

“A steel spine of political argument . . . a mordant wit, refined critical powers, and a bone-deep knowledge of the ways in which Americans like to amuse and fool themselves.” –The Washington Post Book World

“One of the most preeminent voices of journalism has stepped into the ring. . . . [A] gift.” –Susan Faludi, The New York Observer