Locking Up Our Own: Crime and Punishment in Black America (Paperback) 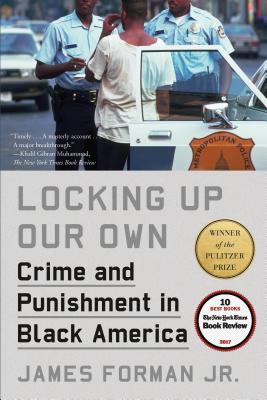 "Locking Up Our Own is an engaging, insightful, and provocative reexamination of over-incarceration in the black community. James Forman Jr. carefully exposes the complexities of crime, criminal justice, and race. What he illuminates should not be ignored." —Bryan Stevenson, author of Just Mercy and founder of the Equal Justice Initiative

"A beautiful book, written so well, that gives us the origins and consequences of where we are . . . I can see why [the Pulitzer prize] was awarded." —Trevor Noah, The Daily Show

Former public defender James Forman, Jr. is a leading critic of mass incarceration and its disproportionate impact on people of color. In Locking Up Our Own, he seeks to understand the war on crime that began in the 1970s and why it was supported by many African American leaders in the nation’s urban centers.

Forman shows us that the first substantial cohort of black mayors, judges, and police chiefs took office amid a surge in crime and drug addiction. Many prominent black officials, including Washington, D.C. mayor Marion Barry and federal prosecutor Eric Holder, feared that the gains of the civil rights movement were being undermined by lawlessness—and thus embraced tough-on-crime measures, including longer sentences and aggressive police tactics. In the face of skyrocketing murder rates and the proliferation of open-air drug markets, they believed they had no choice. But the policies they adopted would have devastating consequences for residents of poor black neighborhoods.

A former D.C. public defender, Forman tells riveting stories of politicians, community activists, police officers, defendants, and crime victims. He writes with compassion about individuals trapped in terrible dilemmas—from the men and women he represented in court to officials struggling to respond to a public safety emergency. Locking Up Our Own enriches our understanding of why our society became so punitive and offers important lessons to anyone concerned about the future of race and the criminal justice system in this country.

James Forman, Jr. is a professor of law at Yale Law School. He has written for the New York Times, The Atlantic, numerous law reviews, and other publications. A former clerk for Supreme Court Justice Sandra Day O’Connor, he spent six years as a public defender in Washington, D.C., where he cofounded the Maya Angelou Public Charter School. He is the author of Locking Up Our Own.

A GQ Book of the Year

"Timely . . . A masterly account of how a generation of black elected officials wrestled with recurring crises of violence and drug use in the nation's capital . . . A big deal and a major breakthrough . . . Forman's novel claim is this: What most explains the punitive turn in black America is not a repudiation of civil rights activism, as some have argued, but an embrace of it . . . " —Khalil Gibran Muhammad, The New York Times Book Review

"Superb and shattering . . . 'How did a majority ­black jurisdiction end up incarcerating so many of its own?' This is the exceptionally delicate question that [Forman] tries to answer, with exemplary nuance, over the course of his book. His approach is compassionate . . . The effect, for the reader, is devastating." —Jennifer Senior, The New York Times

"Remarkable . . . Forman's beautifully written narrative, enriched by firsthand knowledge of the cops and courts, neither condemns black leaders in hindsight nor exonerates the white-dominated institutions . . . He adds historical nuance to the story of 'mass incarceration' told in . . . The New Jim Crow." —Charles Lane, The Washington Post

"Forman’s book is brave, offering a nuanced examination of how black communities and their elected representatives wrestled with rising violence and drug addiction; how they came to embrace a war on drugs and aggressive policing tactics years before Reagan’s war or the advent of broken windows policing; and how they came to eventually regret the surveillance, forfeiture, and criminal records they helped create . . . Forman’s book is a compelling example of how to do local history . . . [A] richly detailed account . . . Incredibly powerful and well-researched . . . Forman is masterful." —Vesla M. Weaver, The Boston Review

"Surprising . . . [Forman's] moving, nuanced, and candid account challenges another aspect of the 'New Jim Crow' thesis. He shows that some of the most ardent proponents of tough·on-crime policies in the era that brought us mass incarceration were black politicians and community leaders—many of whom were veterans of the civil rights movement . . . The correctives offered by Forman . . . have consequences not only for how we understand mass incarceration, but for how we go about fixing it." —David Cole, The New York Review of Books

"An honest and balanced book . . . Locking Up Our Own doesn't play down the history of racism in our criminal-justice system, but it does explain why racial bias doesn't tell the whole story . . . If we are going to have national 'conversations' about race in the U.S., a book like Locking Up Our Own ought to set the tone. If it did, these debates would be not only more honest but also more civil." —Jason L. Riley, The Wall Street Journal

"Revelatory . . . As Forman reminds his readers, black people have long been vigilant, often to no avail, about two kinds of equality enshrined in our nation's ideals: equal protection of the law, and equal justice under the law . . . Locking Up Our Own is a well-timed, nuanced examination of the past . . . [and] makes a powerful case that the African American community was instrumental in creating a monster. We should be grateful that the same community . . . is leading the fight to take the monster down." —Paul Butler, The Atlantic

"Poignant and insightful . . . Forman deftly moves between . . . examples of black community support for a law-and-order crackdown and the dire present-day consequences of our increasingly punitive and aggressive war on crime . . . Timely and important." —Richard Thompson Ford, San Francisco Chronicle

"Eloquent . . . A gritty, often revelatory work of local history, interspersed with tales of Forman's experiences as a public defender . . . Locking Up Our Own is a sobering chronicle of how black people, in the hope of saving their communities, contributed to the rise of a system that has undone much of the progress of the civil rights era. But, as Forman knows, they could not have built it by themselves, and they are even less likely to be able to abolish it without influential white allies, and dramatic reforms in the structure of American society." —Adam Shatz, London Review of Books

"Tightly argued and compellingly readable . . . Forman is ideally suited to tell this tale . . . [and] the story he tells is nuanced . . . Locking Up Our Own is a major contribution to the literature on mass incarceration." —
Matt Wasserman, The Indypendent

"[Forman] offers an insightful history of black American leaders and their struggle to keep their communities safe from police and criminals alike . . . From both these personal experiences and the history that helped shape them, Forman uncovers the black community's role in waging wars on crime and drugs." —Matt Ford, The Atlantic

"Nuanced and insightful . . . Locking Up Our Own relentlessly explores the startling paradox that punitive measures today considered discriminatory were initially supported in the black community on the grounds of self-protection." —Owen Hamill, Seattle Book Review

"[Locking Up Our Own] mirrors a Greek tragedy of national proportions in its notes of dramatic irony . . . But there also runs a deeper seam in Forman's examination of crime and race in America, one of great compassion . . . An important book for this era of reanimated black awareness." —Brandon Tensley, Pacific Standard

"The big spring book to argue about . . . Forman can catalogue more dysfunctional systems at close range than The Wire did." —Boris Kachka, Vulture

"A sharp analysis . . . Forman shows how our nation has gotten to the point where so many citizens—primarily blacks—are imprisoned . . . Writing with authority and compassion, the author tells many vivid stories of the human toll taken by harsh criminal justice policies. He also asks provocative questions . . . Certain to stir debate, this book offers an important new perspective on the ongoing proliferation of America's 'punishment binge.'" —Kirkus Reviews (starred review)

"Forman's comprehensive research and analysis, as well as his compassion and personal experiences, make Locking Up Our Own a powerfully important and accessible glimpse at the U.S.'s punitive criminal justice system." —Jen Forbus, Shelf Awareness

"James Forman Jr. masterfully explores why so many African Americans supported tough criminal laws over the past fifty years, and why, more recently, their attitudes began to shift. Combining dramatic stories from his work as a public defender with original historical research, Forman uncovers mass incarceration’s hidden history while documenting its human cost. Beautifully written, powerfully argued, and, most of all, deeply empathetic, Locking Up Our Own should be read by everybody who cares about race and justice in America." —Van Jones, author of The Green-Collar Economy and Rebuild the Dream

"An absolutely essential read for anyone who wants to understand the politics of crime, race, and incarceration."—Chris Hayes, host of All In with Chris Hayes and author of A Colony in a Nation

"Locking Up Our Own is an engaging, insightful, and provocative reexamination of over-incarceration in the black community. James Forman Jr. carefully exposes the complexities of crime, criminal justice, and race. What he illuminates should not be ignored." —Bryan Stevenson, author of Just Mercy and founder of the Equal Justice Initiative

"James Forman Jr.’s frank and necessary history rings with the authentic voices of black Americans. By paying close attention to local conditions, he shows how well-meaning reforms snowballed into steadily harsher criminal justice policies in Washington, D.C. This is a very valuable and fascinating book—highly readable, engaging, and resolutely accurate about the urban realities it depicts. I recognized this world." —Jill Leovy, author of Ghettoside: A True Story of Murder in America

"Forman's compassionate narrative interweaves the complexities of racial and class dynamics, especially in how African-American political officials, police chiefs, judges and prosecutors came to support the punitive policies that now ravage poor communities of color more than anyone else . . . [Locking Up Our Own] should become required reading for students, citizens, activists and policy reformers interested in excavating how our system of hyper-incarceration was constructed incrementally over decades." —Alex Mikulich, America

"Locking Up Our Own is a pathbreaking examination of the ways that, over the past half century, African American policymakers, social justice activists, jurists, prosecutors, police officials, and ordinary folk have thought about and grappled with the administration of criminal justice. It is vivid, accessible, and full of illuminating insights. It is a brilliant distillation of deep research, disciplined thoughtfulness, and moral passion. In ongoing discussions about crime and justice in America, particularly its racial dimensions, no book will be more essential than Locking Up Our Own.” —Randall Kennedy, Michael R. Klein Professor of Law at Harvard Law School and author of For Discrimination and Race, Crime, and the Law

"James Forman Jr. tells the fascinating story of mass incarceration from the ground up. We see the heartbreaking stories of young people whose life prospects are diminished through tough-on-crime policies, the leaders in the black community whose limited choices led to support for harsh punishments, and the ways in which the legacy of racism still frames outcomes in the twenty-first century. Locking Up Our Own helps us to understand how the prison population exploded and what we need to do to create a more compassionate approach to crime and justice." —Marc Mauer, Executive Director of The Sentencing Project and author of Race to Incarcerate