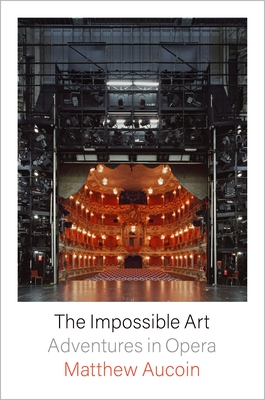 A user's guide to opera—Matthew Aucoin, "the most promising operatic talent in a generation" (The New York Times Magazine), describes the creation of his groundbreaking new work, Eurydice, and shares his reflections on the past, present, and future of opera

From its beginning, opera has been an impossible art. Its first practitioners, in seventeenth-century Florence, set themselves the unreachable goal of reproducing the wonders of ancient Greek drama, which no one can be sure was sung in the first place. Opera’s greatest artists have striven to fuse multiple art forms—music, drama, poetry, dance—into a unified synesthetic experience. The composer Matthew Aucoin, a rising star of the opera world, posits that it is this impossibility that gives opera its exceptional power and serves as its lifeblood. The virtuosity required of its performers, the bizarre and often spectacular nature of its stage productions, the creation of a whole world whose basic fabric is music—opera assumes its true form when it pursues impossible goals.

The Impossible Art is a passionate defense of what is best about opera, a love letter to the form, written in the midst of a global pandemic during which operatic performance was (literally) impossible. Aucoin writes of the rare works—ranging from classics by Mozart and Verdi to contemporary offerings of Thomas Adès and Chaya Czernowin—that capture something essential about human experience. He illuminates the symbiotic relationship between composers and librettists, between opera’s greatest figures and those of literature. Aucoin also tells the story of his new opera, Eurydice, from its inception to its production on the Metropolitan Opera’s iconic stage. The Impossible Art opens the theater door and invites the reader into this extraordinary world.

Matthew Aucoin is an American composer, conductor, writer, and pianist, and a MacArthur Fellow. He has worked as a composer and conductor with the Metropolitan Opera, Lyric Opera of Chicago, American Repertory Theater, Los Angeles Philharmonic, and Music Academy of the West. He was the Los Angeles Opera’s Artist in Residence from 2016 to 2020, and is a cofounder of the American Modern Opera Company.

"Exceptional . . . [Aucoin's] passion is evident in every chapter . . . An inspirational trip through highlights of 400 years of opera." —Kirkus Reviews

"[The Impossible Art's] investigations of musical themes and personal obsessions constitute a scholar’s analysis and a practitioner’s diary as well as a lover’s rhapsody . . . [Aucoin's] intellect is sharp and varied, his tastes catholic." —Willard Spiegelman, The Wall Street Journal

"[The Impossible Art is] a magnificent blend of criticism and rapture." —John Domini, The Boston Globe

" "Like Stravinsky and Rosen before him, Aucoin displays a prose style, a thoughtfulness, a brazenness of opinion arising from expertise, that put him in a league with those predecessors . . . Aucoin can really write. It is a pleasure to read his prose, and the moments when he makes me want to stop right now and go hear the music he describes so vividly are what makes the experience so pleasurable." —Thomas Forrest Kelly, Harvard Magazine

"Aucoin writes with a precise awareness of what has gone before in [opera's] domain." —Geoffrey O'Brien, The New York Review of Books

"Meaty, absorbing, fretting, and ultimately mind-blowing . . . The Impossible Art will last me the rest of my life." —Timothy Pfaff, The Bay Area Reporter

"Here's what George Loomis says: "Many composers have written about music—think of Wagner’s eight volumes of prose—but the phenomenon of a young composer setting forth his thoughts succinctly, persuasively and readably about the nature of opera and selected individual works, as Aucoin does here, is something special." —George Loomis, The New Criterion

"Vivid . . . Aucoin has the impulses of a master auto mechanic, relishing the act of getting under the hood and pulling the engine apart. Best of all, he wants to pass that knowledge on to us. Eschewing musicological jargon, he conveys his enthusiasm and wonder as he spells out, bar by musical bar, how Monteverdi creates a mood or Mozart manages to touch our hearts in the final scene of The Marriage of Figaro." —Wynne Delacoma, The American Scholar

"Triple threat Matthew Aucoin: conductor, librettist, and composer, and now writer and thought leader. The Impossible Art sheds new light on the musicology, history, and personalities that bring opera to life, with a poet’s appreciation of the importance of the libretto, often overlooked. Personal, witty, and well-researched, it will have you rushing to recordings of works you know well, and ones you have never heard, to listen with Aucoin’s provocative insights in mind." —Renée Fleming

"Matthew Aucoin's The Impossible Art shines with unforced generosity; his generation’s perceptiveness, honesty, and frank address; and the personally felt urgency of moving history forward. Writing with uncanny wisdom and a modesty that is equal parts nerdy and heroic, here is a musician who is as insightful about Auden as about Stravinsky and who blows your mind with psychedelic and synesthetic descriptions of Birtwistle. This is a book infused with first love, and first vows of clear-eyed, lifelong devotion." —Peter Sellars

"Deeply insightful and delightfully entertaining . . . The Impossible Art serves as a valuable guide to those who seek a more intimate relationship with art, with opera and with the mysteries of the human soul that reside within the realm of artistic creation—no matter how impossible that realm may be to approach." —Eamon Stein, Shelf Awareness

"I could not put this book down. To read such cogent insights from such an important composer is pure joy from beginning to end. I thought I knew a fair amount about opera, but I learned a lot. If you are new to opera, this book will draw you in—if you are already among the converted, this book will open your eyes to new vistas about this greatest of arts." —Patrick Summers, Artistic & Music Director of the Houston Grand Opera

"Opera lovers will be delighted by this conversational, memoir-style book from an author who has spent years studying and writing in the art form." —Elizabeth Berndt-Morris, Library Journal

"Aucoin speaks eloquently from his own experience as composer, conductor, writer, and pianist . . . With substantial lists of works cited and recommended recordings, Aucoin's insightful and informative opera history will engage everyone interested in music, including students and opera fans." —Booklist

"[Aucoin gives readers] a rare behind-the-scenes look at an art form with a reputation of being particularly impenetrable to outsiders." —Corinne Segal, Lit Hub