A Sand County Almanac: With Essays on Conservation from Round River (Mass Market) 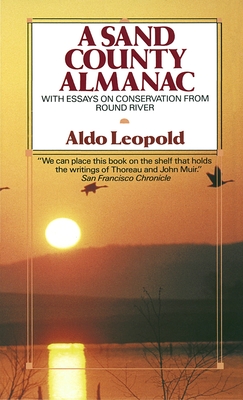 The environmental classic that redefined the way we think about the natural world—an urgent call for preservation that’s more timely than ever.

“We can place this book on the shelf that holds the writings of Thoreau and John Muir.”—San Francisco Chronicle

These astonishing portraits of the natural world explore the breathtaking diversity of the unspoiled American landscape—the mountains and the prairies, the deserts and the coastlines. Conjuring up one extraordinary vision after another, Aldo Leopold takes readers with him on the road and through the seasons on a fantastic tour of our priceless natural resources, explaining the destructive effects humankind has had on the land and issuing a bold challenge to protect the world we love.

Aldo Leopold was born in Burlington, Iowa, in 1887. Educated at the Lawrenceville School and Yale University, he joined the United States Forest Service in 1909 as a forest assistant in New Mexico and Arizona. One of the founders of the Wilderness Society, he initiated, in 1924, the first Forest Wilderness Area in the United States (which is now the Gila National Forest). Moving to Madison, Wisconsin, he was Associate Director of the Forest Products Laboratory, as well as consulting forester to several states.

Mr. Leopold founded the profession of game management and wrote the first important book on the subject. In 1933, the University of Wisconsin created a Chair of Game Management for him. He died in 1948, while fighting a brush fire on a neighbor’s farm. His death cut short an assignment as an advisor on conservation to the United Nations, and left his book A Sand County Almanac as the last statement of his uncompromising philosophy.

“We can place this book on the shelf that holds the writings of Thoreau and John Muir.”—San Francisco Chronicle