The Ten-Cent Plague: The Great Comic-Book Scare and How It Changed America (Paperback) 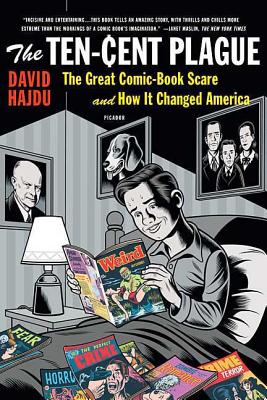 The story of the rise and fall of those comic books has never been fully told -- until The Ten-Cent Plague. David Hajdu's remarkable new book vividly opens up the lost world of comic books, its creativity, irreverence, and suspicion of authority.

In the years between World War II and the emergence of television as a mass medium, American popular culture as we know it was first created—in the pulpy, boldly illustrated pages of comic books. No sooner had this new culture emerged than it was beaten down by church groups, community bluestockings, and a McCarthyish Congress—only to resurface with a crooked smile on its face in Mad magazine.

When we picture the 1950s, we hear the sound of early rock and roll. The Ten-Cent Plague shows how -- years before music -- comics brought on a clash between children and their parents, between prewar and postwar standards. Created by outsiders from the tenements, garish, shameless, and often shocking, comics spoke to young people and provided the guardians of mainstream culture with a big target. Parents, teachers, and complicit kids burned comics in public bonfires. Cities passed laws to outlaw comics. Congress took action with televised hearings that nearly destroyed the careers of hundreds of artists and writers.

The Ten-Cent Plague radically revises common notions of popular culture, the generation gap, and the divide between "high" and "low" art. As he did with the lives of Billy Strayhorn and Duke Ellington (in Lush Life) and Bob Dylan and his circle (in Positively 4th Street), Hajdu brings a place, a time, and a milieu unforgettably back to life.

David Hajdu is the music critic for The Nation and a professor at the Columbia University Graduate School of Journalism. Before joining The Nation in January 2015, he served for more than ten years as the music critic for The New Republic. He is the author of three books of narrative nonfiction and and one collection of essays: Lush Life: A Biography of Billy Strayhorn (FSG, 1996), Positively 4th Street: The Lives and Times of Joan Baez, Bob Dylan, Mimi Baez Fariña and Richard Fariña (FSG, 2001), The Ten-Cent Plague: The Great Comic Book Scare and How It Changed America (FSG, 2008), and Heroes and Villains: Essays on Music, Movies, Comics, and Culture (2009). Lush Life, Positively 4th Street, and Heroes and Villians were all finalists for the National Book Critics Circle Award and won the ASCAP Deems Taylor Award. The Ten-Cent Plague was a finalist for the Eisner award, and the editors of Amazon named it the #1 Best Book of the Year on the arts.

Hajdu is married to the singer and actor Karen Oberlin and is the father of three. He lives in Manhattan with his family.

“A vivid and engaging book.” —Louis Menand, The New Yorker

“David Hajdu, who perfectly detailed the Dylan-era Greenwhich Village scene in Positively 4th Street, does the same for the birth and near death (McCarthyism!) of comic books in The Ten-Cent Plague.” —GQ

“Who knew? The right was focused on the Red Menace and the left on the Red Scare. But, if you want to understand what was really going on in the mad, mad, mad world of the 1950's you should read David Hajdu's hilarious and harrowing account of The Great Comic Book Scare. Hajdu's tale is lurid, absurd, existential, weird, and scary, and contains real-life superheros and supervillains, and there is nothing funny about it.” —Victor Navasky, author of Naming Names

“THE TEN-CENT PLAGUE is about the best account yet of comics in America, an instant classic of cultural history.” —Geoffrey O'Brien, author of Sonata for Jukebox

“Every once in a while, moral panic, innuendo, and fear bubble up from the depths of our culture to create waves of destructive indignation and accusation. David Hajdu's fascinating new book tracks one of the stranger and most significant of these episodes, now forgotten, with exactness, clarity, and serious wit, which is the best kind. He illuminates the lives of his protagonists -- from pompous, on-the-make censors to cracked comic book geniuses -- with his own graphic powers, as well as his intense intellectual curiosity. The book is a rarity, vividly depicting a noirish 1950's America but without a trace of irony or nostalgia.” —Sean Wilentz, Professor of History, Princeton University

“Marvelous . . . a staggeringly well-reported account of the men and women who created the comic book, and the backlash of the 1950s that nearly destroyed it....Hajdu's important book dramatizes an early, long-forgotten skirmish in the culture wars that, half a century later, continues to roil.” —Jennifer Reese, Entertainment Weekly (Grade: A-)

“Incisive and entertaining . . . This book tells an amazing story, with thrills and chills more extreme than the workings of a comic book's imagination.” —Janet Maslin, The New York Times

“To those who think rock 'n' roll created the postwar generation gap, David Hajdu says: Think again. Every page of The Ten-Cent Plague evinces [Hajdu's] zest for the 'aesthetic lawlessness' of comic books and his sympathetic respect for the people who made them. Comic books have grown up, but Hajdu's affectionate portrait of their rowdy adolescence will make readers hope they never lose their impudent edge.” —Wendy Smith, Chicago Tribune

“Hajdu doggedly documents a long national saga of comic creators testing the limits of content while facing down an ever-changing bonfire brigade. That brigade was made up, at varying times, of politicians, lawmen, preachers, medical minds, and academics. Sometimes, their regulatory bids recalled the Hays Code; at others, it was a bottled-up version of McCarthyism. Most of all, the hysteria over comics foreshadowed the looming rock 'n' roll era.” —Geoff Boucher, Los Angeles Times

“A compelling story of the pride, prejudice, and paranoia that marred the reception of mass entertainment in the first half of the century.” —Michael Saler, The Times Literary Supplement (London)"