Dreams in a Time of War: A Childhood Memoir (Paperback) 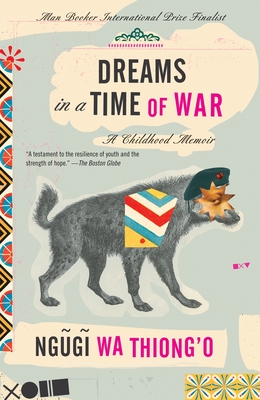 Born in 1938 in rural Kenya, Ngũgĩ wa Thiong’o came of age in the shadow of World War II, amidst the terrible bloodshed in the war between the Mau Mau and the British. The son of a man whose four wives bore him more than a score of children, young Ngũgĩ displayed what was then considered a bizarre thirst for learning, yet it was unimaginable that he would grow up to become a world-renowned novelist, playwright, and critic.

In Dreams in a Time of War, Ngũgĩ deftly etches a bygone era, bearing witness to the social and political vicissitudes of life under colonialism and war. Speaking to the human right to dream even in the worst of times, this rich memoir of an African childhood abounds in delicate and powerful subtleties and complexities that are movingly told.

Ngũgĩ wa Thiong’o is Distinguished Professor of English and Comparative Literature at the University of California, Irvine. His books include Wizard of the Crow, Petals of Blood, Devil on the Cross, and Decolonising the Mind.

“A testament to the resilience of youth and the strength of hope. . . . Vividly evokes the colonial era as experienced by Africans, and the resulting clash of cultures that produced one of the most significant African writers of our time. . . . Ngũgĩ’s greatest literary achievement in this book is to re-create, with almost uncanny success, how the world looked through mid-century African eyes.”
—The Boston Globe

“Eye-opening. . . . The work Ngũgĩ offers us here is like nothing that’s gone before. . . . There is a startling similarity between [Barack Obama’s Dreams From My Father] and . . . Ngũgĩ’s eye-opening memoir. . . . It is admirably free of cant or sentimentality, and yet it is enough to make you weep.”
—The Washington Post

“Absorbing. . . . Infused with a child’s curiosity and wonder, this book is deeply touching in its revelation of a whole community’s stake in nurturing a writer.”
—The Guardian (London)

“Gives its readers an unforgettable sense of another time, a country and a continent in the middle of change. A small child learns to hold onto his dreams, even in a time of war.”
—Los Angeles Times

“Luminously evokes Kenya on the cusp of independence. . . . [This] memoir is suffused with affecting evocations of time and place, as well as a touching reminder that dreams can come true.”
—Richmond Times Dispatch

“Ngũgĩ has been a key figure in Kenya’s modern history, both as a writer and as a model for political engagement, and his three-volume memoir will serve as an important record of the country and the life.”
—Irish Times

“Crisp, clearly told. . . . A fascinating look at twentieth-century African history, but also a moving intellectual odyssey in which Ngũgĩ learns to revere both modernity and tradition but to reserve a healthy skepticism of both.”
—Booklist

“Ngũgĩ has returned to his roots to produce something delicate, fresh and scrupulously honest.”
—The Spectator

“Richly drawn. . . . A coming-of-age tale, gripping, endearing, shocking and funny by turns. . . . The surprise about Dreams in a Time of War is that, for all the provocation of history, and for all its clear-eyed evocation of an agonised time, it is not an angry book. . . . Ngũgĩ’s storyteller’s instinct for character and place, for recurring motifs and telling symbols, triumphs over the bleakness of background.”
—The Scotsman