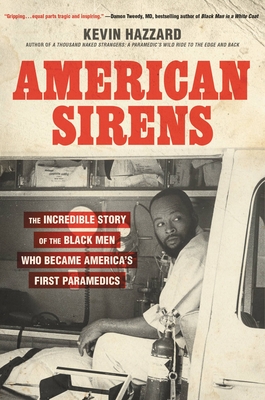 The extraordinary story of an unjustly forgotten group of Black men in Pittsburgh who became the first paramedics in America, saving lives and changing the course of emergency medicine around the world

Until the 1970s, if you suffered a medical crisis, your chances of survival were minimal. A 9-1-1 call might bring police or even the local funeral home. But that all changed with Freedom House EMS in Pittsburgh, a group of Black men who became America’s first paramedics and set the gold standard for emergency medicine around the world, only to have their story and their legacy erased—until now.

In American Sirens, acclaimed journalist and paramedic Kevin Hazzard tells the dramatic story of how a group of young, undereducated Black men forged a new frontier of healthcare. He follows a rich cast of characters that includes John Moon, an orphan who found his calling as a paramedic; Peter Safar, the Nobel Prize-nominated physician who invented CPR and realized his vision for a trained ambulance service; and Nancy Caroline, the idealistic young doctor who turned a scrappy team into an international leader. At every turn, Freedom House battled racism—from the community, the police, and the government. Their job was grueling, the rules made up as they went along, their mandate nearly impossible—and yet despite the long odds and fierce opposition, they succeeded spectacularly. Never-before revealed in full, this is a rich and troubling hidden history of the Black origins of America’s paramedics, a special band of dedicated essential workers, who stand ready to serve day and night on the line between life and death for every one of us.

Kevin Hazzard is a journalist, TV writer, and former paramedic. His first book, A Thousand Naked Strangers: A Paramedic's Wild Ride to the Edge and Back, was published by Scribner in 2016. He now writes for film/TV, with work produced by Hulu, CBS, ABC and Universal. His freelance journalism has been published at 99% Invisible, the Atavist, Men’s Journal, Creative Loafing, Atlanta Magazine, and elsewhere. He is also a sought-after voice on emergency medicine. He lives in Atlanta.

“Remarkable….there are a lot of terrific stories and interesting characters, and it's worth getting this.”—Dave Davies, "Fresh Air" (NPR)

“Journalist and former paramedic Kevin Hazzard paints a vivid picture of the nation’s first EMS service….His book succeeds in recalling long-overlooked events. It’s a medical and human drama that will make readers appreciate the courage of the first paramedics, the foresight of a physician not content to restrict emergency medicine to other doctors and the artistry of modern EMS workers. It’s also a narrative bristling with the indignities of racism and medical ignorance. Hazzard’s subjects defied and overcame prejudice but also were often overwhelmed by both….American Sirens isn’t a book you’re likely to forget.”—The Washington Post

“A gripping story of the people, places, and times that led to the development of Freedom House Ambulance Service, a Pittsburgh-based group of Black men whose efforts laid the foundation for the emergency medical services we take for granted today. Like many chapters of Black history, American Sirens is equal parts tragic and inspiring.” —Damon Tweedy, M.D., New York Times bestselling author of Black Man in a White Coat: A Doctor’s Reflections on Race and Medicine

"A riveting portrait...a fascinating and deeply rewarding study of triumph in the face of adversity."—Publishers Weekly (starred review)

“A work that a reads like a novel. Hazzard relates how a group of African American visionaries, most of whom had been trapped in menial jobs, saw what health-policy experts did not . . .  After their new discipline proved its value in saving lives, organized emergency care, like so many arenas in US medicine, excluded the Black men who invented it and effaced the history of what all Americans owe them, but this riveting page-turner brings these medical heroes long-delayed acclaim.”
—Harriet Washington, NBCC Award Winning Author of Medical Apartheid: The Dark History of Medical Experimentation on Black Americans from Colonial Times to the Present

"Kevin Hazzard...does an excellent job of transforming his research into a compelling narrative suitable to his gripping subject....American Sirens is a stirring, ultimately heartbreaking story in which jaw-dropping medical innovation meets racial prejudice. After finishing Hazzard's memorable account, readers will never hear an ambulance siren the same way again."—BookPage

"In a quintessentially American story that reads like a novel, Kevin Hazzard crafts an amazing story of an Austrian immigrant, an unlikely group of Black men, and a minority community in Pittsburgh who transformed paramedic and ambulance care throughout the United States . . . This heart-warming story is not just Black history, but American history, and every American truly owes the medics of Freedom House a debt of gratitude."
—Gretchen Sorin, Author of Driving While Black: African American Travel and the Road to Civil Rights

"Kevin Hazzard's revelatory American Sirens is a rich, vibrant and deeply human look into the wild journey of American innovation. Hazzard's exacting and expansive research is deeply present on every page, yet it feels invisible, as this electric story pulses, engages, and surprises like a great novel. Each chapter unlocks a new and important angle of this almost forgotten story, which makes it almost pathologically compelling to read. American Sirens brings a necessary spotlight to a fascinating, near-forgotten, and uniquely American tale."

"In this brilliant narrative, Kevin Hazzard leads us on a tour through the history of jazz, baseball, and the misnamed “urban renewal,” to set the stage for Freedom House, a Pittsburgh ambulance service staffed by Black men, that birthed the emergency medical services we all rely on today."—Julie Holland, MD, bestselling author of Weekends at Bellevue: Nine Years on the Night Shift at the Psych ER

“Hazzard has a novelist’s sense of character and narrative drive. He’s at his best telling the story of John Moon [which] makes for gripping and inspiring reading. And Hazzard’s own experience as a paramedic helps us understand why achievement’s like Moon’s learning how to do an intubation in the field was such a big deal…Readers of American Sirens will be more than satisfied, and can hope Hazzard has helped revive and secure the legacy of everyone who breathed Freedom House into life.”—Pittsburgh Post-Gazette

“If readers have ever wondered about the history of paramedicine and how it can transform lives (paramedic and patient alike) look no further than this wonderful, enlightening work by former paramedic [Kevin] Hazzard…. Through extensive research and interviews, the author successfully incorporates the checkered history of paramedicine with the racial and social history of the mid-20th century. Furthermore, he engages the reader with the personal stories of all those involved in the development of the new system. Hazzard has fashioned an exceptional work about radical changes in health care and the importance of community in dark times.”—Library Journal

A Publishers' Weekly Book of the Week Pick!