A Stone Is Most Precious Where it Belongs: A Memoir of Uyghur Exile, Hope, and Survival (Hardcover) 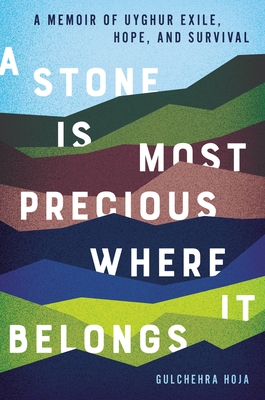 In February 2018, twenty-four members of Gulchehra Hoja's family disappeared overnight. Her crime – and thus that of her family – was her award-winning investigations on the plight of her people, the Uyghurs, whose existence and culture is being systematically destroyed by the Chinese government.

A Stone is Most Precious Where it Belongs is Gulchehra’s stunning memoir, taking us into the everyday world of life under Chinese rule in East Turkestan (more formally as the Xinjiang Autonomous Region of China), from her idyllic childhood to its modern nightmare. The grandchild of a renowned musician and the daughter of an esteemed archaeologist, Gulchehra grew up with her people’s culture and history running through her veins. She showed her gifts early on as a dancer, actress, and storyteller, putting her on a path to success as a major television star. Slowly though, she began to understand what China was doing to her people, as well as her own complicity as a journalist. As her rising fame and growing political awakening coincided, she made it her mission to expose the crimes Beijing is committing in the far reaches of its nation, no matter the cost.

Reveling in the beauty of East Turkestan and its people – its music, its culture, its heritage, and above all its emphasis on community and family – this groundbreaking memoir gives us a glimpse beyond what the Chinese state wants us to see, showcasing a woman who was willing to risk not just her own life, but also that of everyone she loves, to expose her people’s story to the world.

Gulchehra Hoja is a Uyghur journalist based in the United States. Her reporting on the situation in East Turkestan (commonly known as the Xinjiang Autonomous Province) for Radio Free Asia – which led to the incarceration of her entire extended family – has been widely recognized in the US and Europe. She has earned honors such as the 2019 Magnitsky Human Rights Award; the Courage in Journalism Award from the International Women's Media Foundation in 2020; recognition as one of the 500 most influential Muslims in the world every year since 2016; and an appearance at the 2020 Oslo Freedom Forum. She has been profiled for The Washington Post and The Financial Times, among many other publications.