Amateurs, To Arms!: A Military History Of The War Of 1812 (Paperback) 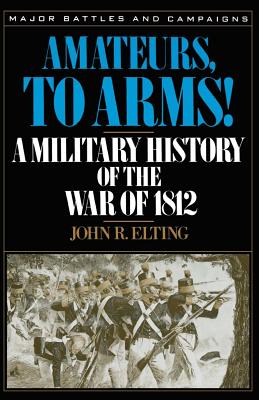 "A gripping narrative of an unpopular and badly fought war--a century and a half before Vietnam--that will shock the uninformed reader."--Military History

Begun in ignorance of the military reality, the War of 1812 was fought catch-as-catch-can with raw troops, incompetent officers, and appallingly inadequate logistics. The odds against the American fighting forces-woefully unrealistic preparations and expectations, British military might, a feckless Congress and administration, the treason of many citizens who fed and praised the enemy-were overwhelming. American soil was invaded along three frontiers, the national capital was occupied and burned, and the secession of the New England states loomed as a definite possibility.

Amateurs, to Arms! examines in succession the campaigns of "Mr. Madison's War": the U.S. invasion of Canada; the key naval battles on Lakes Erie and Champlain; the British invasion via the Chesapeake Bay and its repulse at Baltimore; and the campaign leading to the American victory at New Orleans, fought and won after the war was over. Elting describes the planning and preparations (or lack of them) for the campaigns, tells how they were fought, and analyzes the battlefield performance of both sides. Specially prepared maps and numerous illustrations complement Elting's vivid, penetrating account of how the young republic fought and nearly lost its "Second War for Independence."