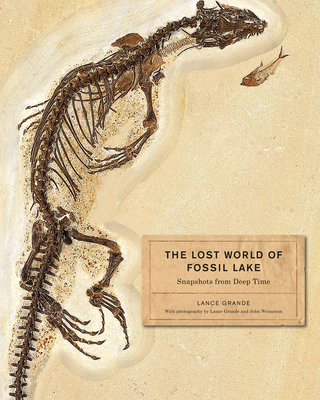 The landscape of southwestern Wyoming around the ghost town of Fossil is beautiful but harsh; a dry, high mountain desert with cool nights and long, cold winters inhabited by a sparse mountain desert community. But during the early Eocene, more than fifty million years ago, it was a subtropical lake, surrounded by volcanoes and forests and teeming with life.  Buried within the sun-baked limestone is spectacular evidence of the lush vegetation and plentiful fauna of the ancient past, a transitional ecosystem giving us clues to how North America recovered from a great extinction event that wiped out dinosaurs and the majority of all species on the planet.  Paleontologists have been conducting excavations at Fossil Butte for more than 150 years, and with The Lost World of Fossil Lake, one of the world’s leading experts on the fossils from this spectacular locality takes readers on a fascinating journey through the history of the discovery and exploration of the site. Deftly mixing incredible color photographs of the remarkable fossils uncovered at the site with an explanation of their evolutionary significance, Grande presents an unprecedented, comprehensive portrait of the site, its treasures, and what we’ve learned from them. Grande presents a broad range of fossilized organisms from Fossil Lake—from single-celled algae to palm trees to crocodiles—and together they make this long-extinct community come to life in all its diversity and splendor. A field guide and atlas round out the book, enabling readers to identify and classify the majority of the known fossils from the site.  Lavishly produced in full color, The Lost World of Fossil Lake is a stunning reminder of the intellectual and physical beauty of scientific investigation—and a breathtaking window onto our planet’s long-lost past.

Lance Grande has been doing fieldwork in the Fossil Butte Member of southwestern Wyoming for more than thirty years. He is senior vice president and head of research and collections at the Field Museum of Natural History, Chicago and has also been curator in the Geology Department there since 1983. He is the award-winning author of more than one hundred books and articles, including Gems and Gemstones: Timeless Natural Beauty of the Mineral World, also published by the University of Chicago Press.

“Enchanting. . . . The Lost World of Fossil Lake is a splendidly illustrated compendium on the c.52 million-year-old fossils found at the lakebed, written with grace and authority. Collections have been made from the site for about 150 years, and although the material has been described in many publications, there has been no comprehensive survey until now. And here it is, and with its 243 fine colour plates, it will appeal to both amateur and professional geologists and palaeontologists.”
— Times Higher Education

“In this lush, in-depth guide to the area's fossilized fauna, palaeontologist Lance Grande offers an in-depth portrait of an aquatic community that thrived in a subtropical wonderland of jungles and volcanoes. Beautifully illustrated in colour, including a field guide and atlas.”
— Nature

"The fossil lakes of the Green River Formation are fantastic paleontological goldmines, and Lance Grande's new book is a detailed tribute to the wonderful forms of life that thrived among those ancient habitats. From damselflies to bats, The Lost World of Fossil Lake is a comprehensive fossil catalog that fleshes out scenes of Eocene life from the lake bottom to the shore."
— Brian Switek, author of My Beloved Brontosaurus and Written in Stone.

"Lance Grande's book is a tour de force celebrating the scientific value, historical background, biodiversity and sheer beauty of the exquisitely preserved fossils from the Fossil Butte localities in Wyoming. Elegantly written with lucid prose and full of enjoyable stories about the human culture of fossil collecting, it is an unforgettable, must-have biography of one of the world's most significant fossil sites."

— John Long, author of The Dawn of the Deed