The Last Imaginary Place: A Human History of the Arctic World (Paperback) 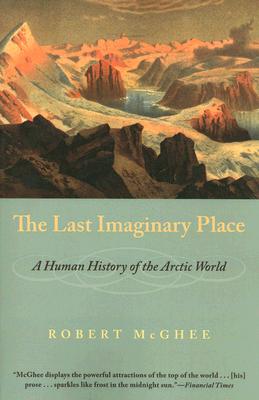 The Arctic of towering icebergs and midnight sun, of flaming auroras and endless winter nights, has long provoked flights of the imagination. Now, in The Last Imaginary Place, renowned archeologist Robert McGhee lifts the veil to reveal the true Arctic world. Based on thirty years of work with native peoples of the Arctic and travel in the region, McGhee’s account dispels notions of the frozen land as an exotic, remote world that exists apart from civilization.

Between the frigid reality and lurid fantasy lies McGhee’s true interest, the people who throughout human history have called the Arctic home. He paints a vivid portrait of Viking farmers, entrepreneurial Inuit, and Western explorers who have been seduced by the natural wealth and haunting beauty of this land. From lively accounts of fur trading, ivory hunting, and whaling to white-knuckle tales of the first, doomed expeditions, McGhee takes the reader on a whirlwind journey across this disorienting, dreamlike terrain that has fascinated mankind for centuries.

“In prose infused by his position as curator of Arctic archaeology at the Canadian Museum of Civilization—which has taken him to sites in several countries—McGhee demolishes some persistent illusions about the white North . . . evocative.”—Times Literary Supplement

“[A] compelling account . . . [McGhee] believes that the Arctic is not so much a region as a dream—what he sees as a dream of a unique, attractive world . . . An archaeologist who has spent thirty years there, the author lets his love for the region shine through on every page.—Booklist

“McGhee displays the powerful attractions of the top of the world . . . [his] prose . . . sparkles like frost in the midnight sun.”—Financial Times

Robert McGhee is curator of Arctic archaeology at the Canadian Museum of Civilization in Ottawa and the author of numerous books, including Ancient People of the Arctic and The Arctic Voyages of Martin Frobisher.

“What McGhee has accomplished in this enthralling book is both a canvas of our imaginary Arctic . . . and a history and anthropology of the real thing. . . . We meet heroism, stupidity, greed, smallpox, and Christianity, not to mention a dead narwhal mistaken for a unicorn.”

"This mix of the anecdotal observation and scholarly argument places McGhee's book comfortably on the boundary between academic and popular history, a beautifully written and well-illustrated volume that is at once informative, entertaining, and difficult to put down. . . . McGhee's work will be of intense interest to students and researchers in the field of northern history, or to the general reader wanting to know more about such topics as Arctic exploration, northern indigenous people, or the Norse colonization of Greenland and North America. . . . A brave and path breaking attempt to situate the Arctic within the broader field of world history, it is also a finely written homage to the people who have inhabited and explored the circumpolar world for centuries."
— John Sandlos

"Superbly written. . . . 'The Last Imaginary Place' is filled with fascinating accounts of fur trading, ivory hunting, native whaling, doomed exploration efforts, and the disorienting terrain that has beguiled and imperiled Europeans from the time of their first access to this remote region. . . . 'The Last Imaginary Place' is as informed and informative as it is engaging and entertaining!"
— Able Greenspan

"Combining archaeology, history and anthropology, The Last Imaginary Place is a history of humans in the Arctic. McGhee also includes some literary history, touching on the place of the Arctic in the imagination and the ways in which this has differed from the reality on the ground, and elements of travel narrative, drawing on his own experiences working on digs...a great read, which I highly recommend to anyone at all curious about the Arctic."
— Danny Yee