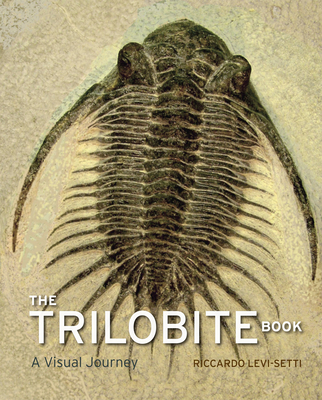 Distant relatives of modern lobsters, horseshoe crabs, and spiders, trilobites swam the planet’s prehistoric seas for 300 million years, from the Lower Cambrian to the end of the Permian eras—and they did so very capably. Trilobite fossils have been unearthed on every continent, with more than 20,000 species identified by science. One of the most arresting animals of our pre-dinosaur world, trilobites are also favorites among the fossil collectors of today, their crystalline eyes often the catalyst for a lifetime of paleontological devotion. And there is no collector more devoted—or more venerated—than Riccardo Levi-Setti. With The Trilobite Book, a much anticipated follow-up to his classic Trilobites, Levi-Setti brings us a glorious and revealing guide to these surreal arthropods of ancient Earth.

Featuring specimens from Bohemia to Newfoundland, California to the Tucson Gem and Mineral Show, and Wales to the Anti-Atlas Mountains of Morocco, Levi-Setti’s magnificent book reanimates these “butterflies of the seas” in 235 astonishing full-color photographs. All original, Levi-Setti’s images serve as the jumping-off point for tales of his global quests in search of these highly sought-after fossils; for discussions of their mineralogical origins, as revealed by their color; and for unraveling the role of the now-extinct trilobites in our planetary history.

Sure to enthrall paleontologists with its scientific insights and amateur enthusiasts with its beautiful and informative images, The Trilobite Book combines the best of science, technology, aesthetics, and personal adventure. It will inspire new collectors for eras to come.

Riccardo Levi-Setti, professor emeritus of physics at the University of Chicago, has served as director of the Enrico Fermi Institute and as an honorary research associate at the Field Museum, Chicago. Although he is trained as a physicist, trilobites have long been his passion. He lives in Chicago.

“They may have died out 250 million years ago, but trilobites—a group of marine arthropods containing some 20,000 species—have a persistent grip on the human imagination. This coffee-table gem . . . marries the intertwined story of [Levi-Setti's] global hunt for specimens and trilobites' place in prehistory with 235 superb colour photographs of select fossils. Perhaps most astounding is the array found by Arkadiy Evdokimov in Russia: their preservation is exquisite, down to the rococo flourishes of curving spines and protuberant, complex eyes.”
— Barbara Kiser

“A stunning picture of the diversity and fascination of the ‘giant woodlice.’ . . . Beginning with a basic flanged, flattened, woodlouse-like form, trilobites radiated into burrowers, scurriers, plodders, and swimmers. Astonishingly diverse, by virtue of numbers, species, and impact, they were major players for over 270 million years. The Trilobite Book is a tour-de-force, spanning the Cambrian to the Devonian, and roaming from Newfoundland to Morocco. It’s hard to know whether to be more impressed by the diversity of trilobite forms, the quality of fossil preservation, or the skills of those who prepared the specimens. . . . The text and photographs, all taken by the author, work beautifully together to build a picture of the intricacy and complexity of trilobites. This is best shown with the eyes, where even the single calcite crystal lenses survived intact. This is the real eye through which trilobites would have seen a world where they did indeed do things differently.”
— Adrian Barnett

"A well illustrated introduction to the trilobites."
— Ian Paulsen

“Fortunately for curious humans, trilobites left behind an abundance of fossils, which look more like magical creatures from another galaxy than fossils from this planet. Their intricate patterns and designs along with a crayon box assortment of colors make them perfect ‘treasure hunt’ collectibles. . . . This gorgeous, well-researched book is a must-have for anyone interested in these prehistoric creatures, as well as anyone who simply wants an impressive book to display on the living room coffee table.”
— Carla Sinclair

“In this enchanting book [trilobites] are portrayed in all their diversity in a series of enthralling colour photographs. . . . The focus of this remarkable book differs somewhat from that of its predecessors. . . . It is a personal journey, a kind of travelogue through the trilobite world, starting with Levi-Setti, a professor of physics at the University of Chicago, finding his first trilobite in a suburb of that city, more than 40 years ago. Since then he has travelled to many trilobite-rich locations around the world, and this book’s ensuing chapters eloquently describe and illustrate what he has collected. . . . Marvellous. . . . Its production values are excellent, its photographs amazing. . . . And at this price it is a bargain, to be savoured with a glass of wine on a winter evening.”
— Euan Clarkson, University of Edinburgh

“Although extinct for 250 million years, trilobites remain one of the fossils most prized by both amateur collectors and professionals because of their incredibly varied and intricate body plan, including one of the first complex vision systems in the animal kingdom. Levi-Setti is a distinguished physicist, but his other passion is paleontology, and he has a demonstrated expertise in collecting, preparing, and imaging trilobites. This coffee-table book, a completely new endeavor and quite distinct from his earlier successful book, Trilobites, provides a richly personal, detailed introduction to the topic. . . . . The real value of this volume is in the glorious full-color illustrations of exquisitely prepared trilobites that would be at home both on the coffee table and on an academic’s bookshelf. . . . Highly recommended.”
— C. A. McRoberts, SUNY Cortland

“To write that it is visually stunning is to put it lightly. Never before in one place have I seen so many amazing photographs of the fossilized remains of these fascinating creatures.”
— John E. Riutta

“Spectacular. . . . Levi-Setti obviously not only knows, but also loves his trilobites, and this love transpires through the book. I found myself devouring page after page. . . . Beautiful.”
— Mihai Andrei

“Is there a more enviable person on Earth than Riccardo Levi-Setti? Professor Emeritus of physics at the University of Chicago, former director of the Enrico Fermi Institute, Guggenheim Fellow, Fellow of the American Physical Society, recipient of the Order of Merit of the Italian Republic, and the Leonardo da Vinci Award of the Order Sons of Italy in America, inventor of the high-resolution scanning ion microprobe . . . and author of three photo-rich volumes on the subject of his avocation, trilobites. . . . Now, nearly four decades after the first Atlas, Levi-Setti has published the book says he has long wanted to but could not because of the prohibitive production costs—a full-color compilation of trilobite photos. The Trilobite Book: A Visual Journey is not a third edition of the original Atlas. It is instead a very personal tour of trilobites the author has known and the expeditions he took in collecting them. . . . Every reader of A Visual Journey will identify their own ‘OMG’ image. . . . A great gift for anyone who answers ‘Trilobite!’ to the question, ‘What is your favorite fossil?’”
— Danita Brandt, Michigan State University