Crying the News: A History of America's Newsboys (Paperback) 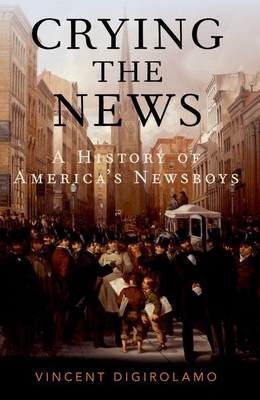 From Benjamin Franklin to Ragged Dick to Jack Kelly, hero of the Disney musical Newsies, newsboys have long intrigued Americans as symbols of struggle and achievement. But what do we really know about the children who hawked and delivered newspapers in American cities and towns? Who were they?
What was their life like? And how important was their work to the development of a free press, the survival of poor families, and the shaping of their own attitudes, values and beliefs? Crying the News: A History of America's Newsboys offers an epic retelling of the American experience from the perspective of its most unshushable creation. It is the first book to place newsboys at the center of American history, analyzing their inseparable role as economic actors and cultural
symbols in the creation of print capitalism, popular democracy, and national character. DiGirolamo's sweeping narrative traces the shifting fortunes of these little merchants over a century of war and peace, prosperity and depression, exploitation and reform, chronicling their exploits in every
region of the country, as well as on the railroads that linked them. While the book focuses mainly on boys in the trade, it also examines the experience of girls and grown-ups, the elderly and disabled, blacks and whites, immigrants and natives. Based on a wealth of primary sources, Crying the News uncovers the existence of scores of newsboy strikes and protests. The book reveals the central role of newsboys in the development of corporate welfare schemes, scientific management practices, and employee liability laws. It argues that the
newspaper industry exerted a formative yet overlooked influence on working-class youth that is essential to our understanding of American childhood, labor, journalism, and capitalism.

Vincent DiGirolamo is Associate Professor of History at Baruch College of the City University of New York and an award-winning journalist and documentary filmmaker.