The Deluge: The Great War, America and the Remaking of the Global Order, 1916-1931 (Paperback) 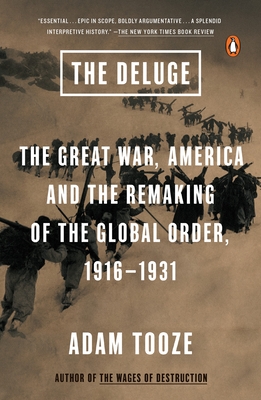 A searing and highly original analysis of the First World War and its anguished aftermath—from the prizewinning economist and author of Shutdown, Crashed and The Wages of Destruction

In the depths of the Great War, with millions dead and no imaginable end to the conflict, societies around the world began to buckle. The heart of the financial system shifted from London to New York. The infinite demands for men and matériel reached into countries far from the front. The strain of the war ravaged all economic and political assumptions, bringing unheard-of changes in the social and industrialorder.

A century after the outbreak of fighting, Adam Tooze revisits this seismic moment in history, challenging the existing narrative of the war, its peace, and its aftereffects. From the day the United States enters the war in 1917 to the precipice of global financial ruin, Tooze delineates the world remade by American economic and military power. Tracing the ways in which countries came to terms with America’s centrality—including the slide into fascism—The Deluge is a chilling work of great originality that will fundamentally change how we view the legacy of World War I.

Adam Tooze is the author of Wages of Destruction, winner of the Wolfson and Longman History Today Prize. He is the Kathyrn and Shelby Cullom Davis Professor of History at Columbia University. He formerly taught at Yale University, where he was Director of International Security Studies, and at the University of Cambridge. He has worked in executive development with several major corporations and contributed to the National Intelligence Council. He has written and reviewed for Foreign Affairs, the Financial Times, the Guardian, the Sunday Telegraph, the Wall Street Journal, Die Zeit, Sueddeutsche Zeitung,Tageszeitung and Spiegel Magazine, New Left Review and the London Review of Books.

“For anyone seeking to understand how American predominance was achieved in the years after World War I, and why it catastrophically failed to keep the hard-won peace, Adam Tooze has written an essential book. Epic in scope, boldly argumentative, deftly interweaving military and economic narratives, The Deluge is a splendid interpretive history.” — The New York Times Book Review

“A grand and groundbreaking reinterpretation of World War I and its aftermath.”—Minneapolis Star Tribune

“A globe-spanning and wide-ranging examination of how America’s historic decision to join that epochal war changed the U.S. as well as the entire world order, ‘The Deluge’ is also a look at a past that is both terribly remote and hauntingly familiar.”—Salon

“Tooze guides us through the numerous diplomatic and economic catastrophes that emerged from World War I. Eventually we start to get a well-rounded and extremely comprehensive insight into why Wilson’s American foreign policy was so misguided.... Excellent... provide[s] us with a superb insight into the collapse of a stable Europe.”—The Daily Beast

“A thoroughly researched, much-needed reexamination of America’s role in the aftermath of World War I that will appeal to any reader interested in the interwar period.”— Library Journal, Michael Farrell, Reformed Theological Seminary, Orlando, FL

“In this landmark study, Tooze offers an elegant account of the reordering of great-power relations that took place after World War I, at the dawn of ‘the American century.’”— Foreign Affairs, G. John Ikenberry

“Adam Tooze’s utterly hypnotic study reaches back to a time in which fragile economies across the world were every bit as intertwined and acutely vulnerable, and where unforeseen economic shocks could be enough to trigger apocalyptic bloodshed. What Adam Tooze has done—a huge, formidable achievement—is to reconstruct a vast global web, and to show how the slightest vibrations on its threads had consequences everywhere, almost regardless of individual fears and hates or venomous ideologies. The breadth of his scholarship also frighteningly illuminates the fragility of peace.” — The Telegraph (UK)

“Tooze shows, more emphatically than any other scholar I have read, how decisively and how sweepingly the First World War ended this state of affairs….Tooze's brilliant account also offers much food for thought for any observer of the current international scene.” —The Guardian

“The Deluge sets a provocative framework for studies of the Great War, one that places issues of US power and American history at the center. Its well-written critique of US leadership and its insightful account of the intricate policies of the major powers deserve a wide readership among those who wish to understand how the world careened from the Great War into the Great Depression.” —Current History

“Bold and ambitious... The Deluge is the work of a fine historian at the peak of his powers, formidable in its range and command of the material, written in strong, muscular prose.... The best of the current deluge of books about the first world war.”—Ben Shephard, The Observer (UK)

“[Tooze’s] new book confirms his stature as an analyst of hugely complex political and economic issues…. Here, as in his earlier work, Tooze shows himself a formidably impressive chronicler of a critical period of modern history, unafraid of bold judgments.”—Max Hastings, The Sunday Times (UK)

“Tooze’s book is an invaluable account of why the US and its allies, having defeated Germany in 1918, were unable thereafter to stabilise the world economy and build a collective security system.”—The Financial Times

“Amid all the current commemorative news, a clear and compelling rationale as to why it is actually worth going back and looking at the era of the First World War at this particular moment in time.”—Neil Gregor, Literary Review